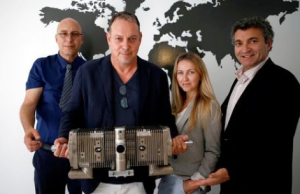 PSA Group is preparing to test battery-powered cars that recharge with an on-board generator, industry sources said, as the French carmaker hunts for a breakthrough in mass-market electric vehicles to catch rivals Toyota and Renault-Nissan.

Sales of so-called range extenders, pioneered by General Motors in the 2011 Chevrolet Volt, will multiply as the gasoline generators become lighter and more efficient, according to the technology’s backers. That could allow electric cars to carry smaller batteries, shedding more weight and cost.

Aquarius Engines, an Israeli startup, said a major European carmaker had agreed to fund further development and road tests of its single-piston generator design, declining to identify the customer. But Paris-based PSA, the maker of Peugeot, Citroen and DS cars, confirmed its involvement.

“We are evaluating the technology,” said PSA Research and Development Director Gilles Le Borgne. “Nothing has been decided yet.”

PSA, which declined further comment, is pursuing an ambitious turnaround following a 2012-14 crisis that saw it fall behind competitors on research and development until it secured a cash bailout from the French state and China’s Dongfeng. Chief Executive Carlos Tavares has pledged to introduce 11 new electric and hybrid models by 2021.

To meet ever-tightening carbon emission limits, carmakers will need popular, affordable vehicles that draw more heavily on electric propulsion. Demand for pure-electric cars remains marginal in most markets, held back by their limited range and costly batteries, even after significant government incentives.

Hybrids like the Toyota Prius, which next year marks the 20th anniversary of its original version’s launch, combine a battery and electric motors with a combustion engine, both driving the transmission mechanically. But fuel savings are limited by the system’s added weight, complexity and cost, making it unsuitable for small mass-market vehicles.

Range extenders like the Volt’s 1.4-litre engine or the two-cylinder generator aboard BMW’s i3 offer a different compromise, kicking in to keep the electric motors humming only when the battery runs low. As with hybrids, however, their heft cuts the distance that can be covered before that happens.

In a rethink of engine fundamentals, Aquarius has pared the range extender down to a single piston that blasts to and fro inside a valveless 600cc cylinder, generating power from electromagnetic coils with each stroke. It delivers more than twice the overall energy efficiency of a typical combustion engine, according to simulations by German engineering firm FEV.

“If the concept works in reality it’s going to have a lot of potential,” said Pavan Potluri, a powertrain analyst with industry consulting firm IHS Automotive.

“But vehicle manufacturers are always very risk-averse, so the biggest challenge may be getting one to sign up to it.”

PSA has some risk-taking form. In 2013 it developed a fuel-efficient “Hybrid Air” system with Bosch and was ready to take the pneumatic-hydraulic drivetrain into production, but failed to find another manufacturer willing to split the investment.

According to Aquarius, several prototype vehicles using its free-piston generator will be road-tested by the carmaker client early in 2017.

At an estimated $17,000 per vehicle, costs should undercut both conventional hybrids that come in closer to $25,000 and pure-electrics at around $40,000, the private company projects.

“Aquarius offers an alternative to a 100-percent electric vehicle,” advisory board member Efraim Wasservogel said. With ultra-low emissions, it reduces the required quantity of battery cells “that no one knows how to recycle”, he added.

Not everyone is convinced. Many industry leaders believe adding a combustion engine harms the zero-emissions appeal of electric cars as well as their eligibility for green incentives.

While more than half of BMW’s i3 customers opted for a range extender with the original model, that proportion is “substantially lower” since a revamp improved battery range, the company said. Toyota unveiled its own free-piston generator design in 2014 but has yet to announce plans for the technology.

Renault, a first-mover in the current generation of electric cars with alliance partner Nissan, has its own prototype two-stroke range extender and no intention of using it, according to a senior alliance engineer.

The carmaker, PSA’s domestic rival, had also reviewed the Aquarius kit and decided to pass, he said.

“We’re going to extend their range,” Deboeuf said. “But we’ll do it without range extenders.”

Source Reuters by Edward Taylor in Frankfurt and Gilles Guillaume in Paris, editing by Mark Potter