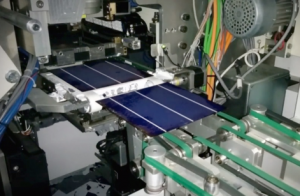 In August 2012, after successfully accomplishing the feasibility study, which was backed by angel investors and R&D grants from the Israeli office of Chief Scientist, the company received investments from three venture funds towards the development of commercial products for the solar PV industry. The company has developed strategic partnerships with leading solar cell manufacturers in China and Taiwan.

Founded in 2008 by Amir Noy, Michael Matusovsky, Giora Dishon and Moshe Finarov. The company is located in the industrial zone of Yavne, about 20 km south of Tel-Aviv, Israel.

“The company is claiming that the the new PTP process is capable of saving traditional manufacturers up to $500,000 in silver paste and an additional $500,000 in annual efficiency for a standard 40mw PV manufacturing line.  Based on these calculations, the company promises that those who are brave enough to use the process in their line will see a full return on cost in less than half a year – a very short span of time when all is said and done” (source 3ders.org).