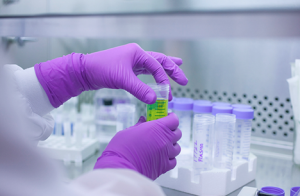 JAMA Neurology published the findings of the Phase 1/2 and Phase 2a ALS Clinical Trials conducted by Dr. Dimitrios Karussis, MD, PhD, Sr. Neurologist, HMO Neurology, in their 1/11/16 issue.  These Clinical Trials, which began in 2011, utilized an innovative adult stem cell self-transplantation treatment involving the harvesting of stem cells from the patient’s bone marrow, their culture and enhancement using Brainstorm’s patented protocol NurOwn® and their injection into the patient’s cerebrospinal fluid by a technique that was developed and proposed by the Hadassah investigators.  26 ALS patients participated in the trials at HMO / Jerusalem, which is owned by HWZOA.

HMO Principal Investigator Dr. Karussis explains the JAMA Neurology study findings: “The results are very encouraging.  Close to 90% of patients who were injected intrathecally through the spinal cord fluid were regarded as responders to the treatment either in terms of their respiratory function or their motor disability.  Almost all of the patients injected in this way showed less progression and some even improved in their respiratory functions or their motor functions.  A Phase 2, double blind, study is running currently, at Mayo Clinic, Massachusetts General Hospital and University of Massachusetts Memorial Medical Center, using a treatment protocol identical to the HMO trial.

Dr. Karussis continued, “In 2011, BrainStorm Cell Therapeutics initiated a Phase 1/2 clinical trial with ALS patients who received NurOwn™ cells. The trial, which was conducted at the Hadassah Medical Organization in Jerusalem, was designed to primarily evaluate the safety and tolerability of NurOwn™ in ALS patients. In two open-label studies, intrathecal (IT) or intramuscular (IM) treatment of 26 ALS patients with autologous MSC-NTF cells was found to be safe and well-tolerated over the study period.  Our data also provide clear indications for clinically meaningful beneficial effects. I am optimistic that within the foreseeable future, we may provide a treatment to ALS patients that can slow down or stop the progression. I believe we are in the early stages of something new and revolutionary with this harvested stem cell infusion therapy.  While this is absolutely by no means a cure, it is the first step in a long process in that direction.  I see this treatment as being potentially one of the major future tools to treat degenerative diseases of the brain and spinal cord, in general.”

The JAMA Neurology study also details NurOwn,® BrainStorm’s proprietary process for differentiation of autologous Mesenchymal Stem Cells (MSC) into NeuroTrophic Factor (NTF)-secreting cells (MSC-NTF), and their transplantation back into the ALS patient at or near the site of damage.  These specialized adult stem cells, derived from the patient’s own bone marrow, deliver nerve growth factors directly into the affected tissue sites in order to enhance the growth and function of the nerve cells. The ability to induce differentiation of autologous adult Mesenchymal Stem Cells into MSC-NTF cells is unique to NurOwn® making it the first-of-its-kind treatment for treating neurodegenerative diseases. The activity and potency of these stem cells is validated before transplantation.

NurOwn® received Orphan Drug Designation from the U.S. Food and Drug Administration (FDA) in February, 2011, and from the European Commission in July 2013. In October, 2014 Brainstorm was granted Fast Track designation for NurOwn® by the FDA.  A 2011 study determined that BrainStorm’s self-transplantation approach has a high safety profile, with no risk of rejection and no need for treatment with immunosuppressive agents which can cause severe and/or long-term side effects.

Hadassah President Ellen Hershkin states, “For over 75 years, Hadassah’s hospitals have been in the vanguard of innovative medical discoveries, research and treatments. Under Dr. Karussis’ direction, HMO is eager to continue its groundbreaking work to combat ALS and similar neurodegenerative or neuroinflammatory diseases, such as multiple sclerosis and many others.  ALS is estimated to affect 30,000 people in the US and 450,000 worldwide.”

Chaim Lebovits, President of BrainStorm Cell Therapeutics, states, “BrainStorm Cell Therapeutics, a leading developer of stem cell technologies for neurodegenerative diseases, is proud to be a pioneer in the testing and development of stem cell transplantation treatments for ALS. Following the spectacular results of our 2nd Phase trials, BrainStorm looks forward to the results of the US double blind trial as well as the start of a multiple dose trial at HMO in Israel to help us prove the efficacy of this innovative new treatment.”

About BrainStorm Cell Therapeutics:  Brainstorm Cell Therapeutics (Nasdaq: BCLI) is a US/Israeli biotechnology company engaged in the development of adult stem cell therapeutic products derived from autologous bone marrow cells and intended for the treatment of neurodegenerative diseases such as Amyotrophic Lateral Sclerosis (ALS, also known as Lou Gehrig’s disease), Multiple Sclerosis, and Parkinson’s disease (PD). The company holds the rights to develop and commercialize its NurOwn™ technology through an exclusive, worldwide licensing agreement with Ramot at Tel Aviv University Ltd., the technology transfer company of Tel-Aviv University. Over 20 publications in leading scientific journals demonstrating NurOwn’s mechanism of action, pharmacology and in vivo efficacy have been published by the scientific team. For more information, visit the company’s website at www.brainstorm-cell.com

Hadassah is the largest Jewish women’s organization in the United States.  With 330,000 members, associates and supporters Hadassah brings Jewish women together to effect change and advocate on critical issues such as medical care and research, women’s empowerment, and the security of Israel. Through the Hadassah Medical Organization’s two hospitals, the world-renowned trauma center and the leading research facility in Jerusalem, Hadassah supports the delivery of exemplary patient care to over a million people every year. HMO serves without regard to race, religion or nationality and earned a Nobel Peace Prize Nomination in 2005 for building “bridges to peace” through equality in medical treatment. For more information, visit www.hadassah.org