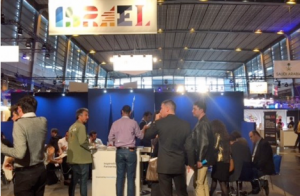 The first edition of Viva Technology Paris, the first international event dedicated to the growth of startups and the collaboration between large companies and startups has been a success. Over 45,000 visitors attended Viva Technology over three days, of which the first two were dedicated to professionals and the third open to the public. 5,000 startups participated in this first edition as exhibitors, contributing to the challenges set forth by our Lab partners, as hopefuls for the over 50 awards given out, or simply as visitors to the event.

Co-organized by Groupe Les Echos and Publicis Groupe [Euronext Paris: FR0000130577, CAC40], Viva Technology Paris was inaugurated by the President of the Republic of France, François Hollande, and welcomed Minister of the Economy, Emmanuel Macron, the Secretary of State in charge of Digital, Axelle Lemaire, the Mayor of Paris, Anne Hidalgo, the President of the Ile de France region, Valérie Pécresse, and the President of the Hauts de Seine region, Xavier Bertrand.

Over 10 million euros were distributed during the event to winning startups from key business partners and investors.

Publicis Groupe celebrated its 90th anniversary at Viva Technology Paris by honoring 90 startups from 30 countries who participated in the global startup initiative, Publicis90 The Grand prize was awarded to Emerald Medical Applications for its skin cancer early-detection application using technology to save lives.

“The idea to create an event that would place France at the heart of the digital ecosystem has been an intention of mine for years. It was particularly gratifying to see the young startups and entrepreneurs so happy to be there, appreciated, and able to connect with large companies and investors. I am very happy to have been able to facilitate these connections. Some amazing technologies were presented in the Hall of Tech, among which several French companies were on display. We created the only event of its kind to open its doors to the public passionate about new technology. Viva Technology Paris has become the reference of digital innovation. We are extremely proud to have exceeded our goal. We were very ambitious but the numbers prove that we went above and beyond our hopes. We are also pleased to announce that we will be back with the second edition in 2017,” declared Maurice Lévy, Chairman & CEO of Publicis Groupe.

“Viva Technology Paris was far more than a technology summit.  For three days, Paris became and will remain the heart of the synergy between large companies and startups. We achieved another goal of ours, which was to bring in the most important speakers in the industry, which we also achieved. The two professional days were rich in lessons. The third day open to the public was such a success that we are confident in bringing the event back for a second edition next year. France has incredible assets in digital and innovation and Viva Tech clearly demonstrates our ambition to contribute to this impetus. Viva Technology reached nearly 41 million people on social media, 95% on Twitter. The international resonance of the event was exceptional, with 159 countries talking about Viva Technology,” added Francis Morel, CEO of Groupe Les Echos.

“In conclusion, we are very pleased with the collaboration between Publicis Groupe and Groupe Les Echos. The teams accomplished an extraordinary job in a very short amount of time,” said Francis Morel and Maurice Lévy jointly.

In case you missed it:

Hyperconnectivity, an opportunity for growth

Today, everything is connected and interconnected. In every industry, hyperconnectivity is recognized as the way to transform classic business models. The Internet of Things is a factor of its success, efficiency and growth. In order to get there, understanding opportunities of Big Data is key.

The democratization of augmented and virtual reality or even robots is opening doors to a new world of emotions, experience and adventures in gaming, content, health and finance. Innovation allows us to cross borders: data is everywhere, blockchains know no barriers, and consumers buy products and services internationally.

Present across the booths at Viva Technology were many innovations including: the SeaBubble, a vehicle that flies over water, the Phantom Gold by Devialet, the connected anti-UV patch by L’Oréal and La Roche-Posay, Jacquard the connected fabric by Google in partnership with Levi’s, the new virtual reality headset Playstation VR by Sony, the first connected bathroom mirror by Miliboo and more.

Viva Technology Paris, the international event organized by Publicis Groupe and Groupe Les Echos, is dedicated to the growht of startups, to digital transformation and innovation. For its first edition, Viva Technology Paris brought together from June 30 – July 2 in the Hall 1 of Porte de Versailles in Paris over 45,000 visitors of which tens of thousands of entrepreneurs, talents, investors and academics. More information at www.vivatechnologyparis.com and @VivaTech on Twitter.