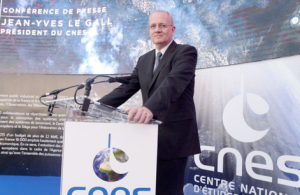 Jean-Yves Le Gall began by pointing out that as a programme-led space agency and technical field centre, CNES is at the crossroads between industry, the scientific community and other partner space agencies, thus guaranteeing, in addition to its international reach, state-of-the-art space systems for science while fuelling innovation.

CNES’s President illustrated this with two concrete examples accomplished with ISA:-  VENμS (Vegetation and Environment monitoring on a New Microsatellite) is performing a science mission to advance understanding of climate change and its impacts, and a technology mission to qualify an Israeli electric propulsion technolog-  C3IEL (Cluster for Cloud Evolution, ClImatE and Lightning), a mission devoted to sensing cloud evolution, climate and lightning, a scientific and technological world first that will combine observations of water vapour and lightning.

Jean-Yves Le Gall underlined that for 60 years CNES has pursued a strategic industrial policy to sustain the space ecosystem’s competitiveness and maintain the nation’s technological edge, adapting its processes and tools to support industry throughout the value chain, from prime contractors to SMEs and start-ups. He notably mentioned the success of ActInSpace, which has turned 34 projects into businesses, and ConnectByCnes, which is leveraging all stakeholders in the innovation chain and the expertise of a network of engineering teams to develop new applications.

CNES’s President noted that the space sector is set to evolve towards a data-driven economy rather than one reliant on infrastructure. He concluded by underlining that government investment remains vital, even if the line between public and private is becoming increasingly blurred. A perfect illustration of these new paradigms in the field of location-based services and this public-private approach is KINEIS, a firm in which CNES and CLS are key shareholders.