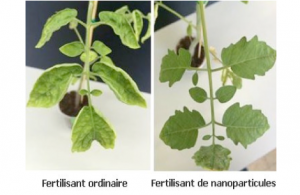 The particles, called liposomes, are nanosized, spherical pouches that can deliver drugs to specific parts of the body (SN: 12/16/06, p. 398). Now, researchers have filled these tiny care packages with fertilizing nutrients. The new liposomes, described online May 17 in Scientific Reports, soak into plant leaves more easily than naked nutrients. That allows the nanoparticles to give malnourished crops a more potent pick-me-up than the free-floating molecules in ordinary nutrient spray.

Each liposome is a hollow sphere about 100 nanometers across, and is made of fatty molecules extracted from soybean plants. Once a plant leaf absorbs these nanoparticles, the liposomes spread to cells in the plant’s other leaves and its roots, where the fatty envelopes break down and release their molecular cargo.

Researchers first exposed tomato plants to either liposomes packed with a rare earth metal called europium, or free-floating europium molecules. Europium doesn’t naturally exist in plants or soil, so it’s easy to trace how much of this element plants soaked up after treatment. Three days after exposure, plants treated with liposomes had absorbed up to 33 percent of the nanoparticles. Plants exposed to free-floating europium took in less than 0.1 percent of the molecules

The researchers then spritzed iron- and magnesium-deficient tomato plants with either a standard spray containing iron and magnesium, or a solution containing liposomes packed with those nutrients. Two weeks later, the leaves on plants treated with free-floating nutrients were still tinged yellow and curled. Plants that received liposome treatment sported healthy, green leaves.

Liposome-based spray would need to be tested on a variety of vegetation before it could enter widespread use, says Ramesh Raliya, a nanobiotechnology researcher at Washington University in St. Louis not involved in the work. That’s because the pores on leaves where liposomes are assumed to enter plants can range from 50 to 150 nanometers across. If a plant’s pores are smaller than 100 nanometers, the liposomes can’t squeeze inside.

Mariya Khodakovskaya, a biologist at the University of Arkansas at Little Rock, is wary of the potential cost of this new technique. Fashioning liposomes is expensive. That’s not a problem for making liposome-based medication, which requires only a small amount of nanoparticles. But for any new agricultural practice to take root, she says, “it has to be massive, and it has to be cheap.”