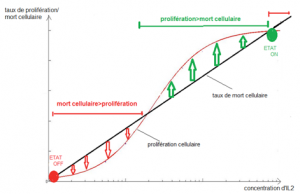 In Alice in Wonderland, one side of the mushroom made her shrink, while the other side of the same mushroom made her grow. Alice may have been confused by this, but a similar paradox is often evident in biology: The same molecule can have completely opposite effects on the cells that receive its signals. These signaling molecules are secreted and consumed by cells in order to communicate with each other and coordinate actions. Thus, for example, a certain molecule can signal enhanced cell division to increase cell numbers and, at the same time, enhance the probability of cell death. Is there a reason why nature chose this counterintuitive strategy? Can one molecule somehow do both jobs better than two?

The communication between T cells – part of the immune system’s protection against invading pathogens – provides a good basis for gleaning insight: T cells secrete a signaling molecule, called IL-2, which has the split function of increasing T-cell proliferation and inducing T-cell death. In previous collaborative research, the groups of Dr. Nir Friedman of the Weizmann Institute’s Immunology Department and Prof. Uri Alon of the Molecular Cell Biology Department had developed a mathematical model predicting that the paradoxical mechanism of IL-2 enables the body to reach a state of homeostasis – that is, maintaining a relatively steady number of cells. “Balance in such a system is important in order to prevent too large a response on the one hand, which could prove wasteful or harmful, or too weak a response on the other hand,” says Friedman.
The scientists recently joined forces again to put their theoretical predictions to the experimental test. Dr. Shlomit Reich-Zeliger and former postdoctoral fellow Dr. Yaron Antebi in Friedman’s lab, together with then PhD student Yuval Hart in Alon’s group, cultured T cells in groups of different starting sizes and followed their numbers for a week. Their findings, recently published in Cell, support the notion that T cells do indeed reach homeostasis as a result of the paradoxical IL-2  signaling – maintaining an almost fixed number of cells regardless of their initial concentration. However, again as predicted, this is only true above an initial threshold level of cell numbers. Below that threshold, the T-cell population shrinks to extinction. Friedman: “This function might serve as a kind of ‘safety switch,’ possibly to prevent an exaggerated response to a harmless trigger mistakenly identified by just a few cells.”

The experiments helped validate further predictions: The body’s homeostasis is dependent on IL-2; T cells “lose their balance” if they can’t produce this molecule. The researchers also confirmed that IL-2 levels rise and fall, with peak levels occurring, counterintuitively, at relatively low cell numbers – just above the threshold. At this level, the higher signal probably functions to boost T-cell proliferation.

Still, why use a “two-in-one” molecule? To answer the question, the scientists decided to test other possible scenarios by plugging a two-molecule solution into their mathematical model. The results showed that two separate molecules, each with its own function, would make the system more sensitive to environmental perturbations that could throw it completely off balance. In contrast, having one molecule with two functions proved to be a more robust setup, enabling the system to better sense and compensate for additional signals in the surrounding environment – something like Alice eating bits from alternate sides of the mushroom until her senses told her she had reached the right height.

IL-2 is used to treat various diseases, but its use is hampered by possible serious side effects. A better understanding of its complex mechanism of action may therefore help toward designing more effective interventions in the future. More generally, these findings can also be applied to other biological systems whose molecules display similarly paradoxical signaling – for example glucose, which has contradictory effects on the insulin-producing cells in the pancreas.
This study provides an important step toward gaining a better, more quantitative understanding of the complex intercellular responses between communicating cells. By modeling the population dynamics of cells in such complex systems as the human immune system, studies like this can reveal the paradoxical nature of our existence.
Also participating in the research were Dr. Irina Zaretsky of the Immunology Department and Dr. Avraham Mayo of the Molecular Cell Biology Department.