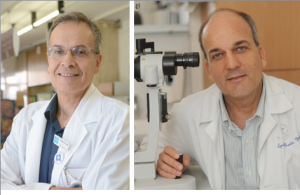 On September, 02 2015 by Esther Amar, Founder of Israël Science Info

The deterioration advances slowly and painlessly, but age-related macular degeneration (AMD) is the leading cause of blindness in the Western World. Until now there has been no cure. Following FDA and Israeli Ministry of Health approval, the first Israeli patient underwent at Hadassah Medical Center in Jerusalem transplantation of healthy, young cells that it is believed will replace critical cells lost with age in the so called “dry” form of AMD.

AMD affects the macula, which is the part of the retina responsible for sharp, central vision that is important for facial recognition, reading and driving. There are about 1.6 million new cases of dry-AMD in the US annually. The root cause of dry-AMD is believed to be the dysfunction of Retinal Pigmented Epithelium (RPE) cells that underlie and support the retina. Human Embryonic Stem Cells may serve as an unlimited source of healthy RPE cells that may be transplanted to replenish the lost and dysfunctional ones in AMD patients, with the goal of arresting or at least delaying disease progression.

The scientific groups of Prof. Benjamin Reubinoff (Director of Hadassah’s  Sidney and Judy Swartz Center for Human Embryonic Stem Cell Research and Head of Obstetrics and Gynecology) and Prof. Eyal Banin (Director of the Center for Retinal and Macular Degenerations at the Department of Ophthalmology at Hadassah), have been working in collaboration for more than a decade to elucidate the pathways that will allow derivation of RPE cells from human embryonic stem cells for transplantation therapy of AMD. The actual transplanted RPE cells were developed by Cell Cure Neurosciences, Ltd., a start-up company based on  technology licensed from Hadassah with the aim of utilizing human embryonic stem cells as a platform for the treatment of retinal and neurological diseases.

“This transplantation is the initial step in a trial that will include fifteen patients and will be among the very few similar pioneer clinical trials worldwide using cells derived from human embryonic stem cells. The goal of this trial is primarily to ensure the safety of transplantation of the cells, and also to evaluate parameters of possible therapeutic effects, according to Prof. Reubinoff.

“The transplantation procedure performed on the 18th of August by Dr. Ytzhak Hemo, Director of the Retina Unit, was successful and to date there are no ocular or systemic complications. This first patient and additional patients will be followed closely for a period of a year to establish the safety of the treatment and to assess possible effects on the course of disease”, said Prof. Eyal Banin. “Therapy based on embryonic and other types of stem cells is poised to change the way we perform medicine, and we are very excited to take part in this revolution”, added Prof. Banin.