A new bandage invented by Israelis aims to save lives by stopping otherwise unmanageable bleedings. Video. 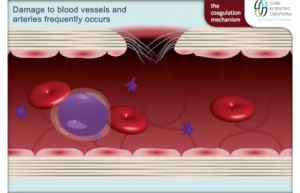 Stab and gunshot wounds that cause profuse bleeding, if not treated quickly, can bring about a rapid death. Professional help is not always close at hand… which is why an Israeli company called Core Scientific Solutions has invented WoundClot, an innovative new bandage they say will save lives. Dr. Shani Eliyahu Gross is part of the development team. SOUNDBITE) (English) Dr SHANI ELIYAHU GROSS, VP and CTO of CSC, SAYING: “It comes in a long ribbon. When we place it into the wound, in this case it is only water, but when it is exposed to liquids, this product starts to absorb enormous amount of blood and then it transforms into a gel state.” Gross says the bandage not only stops otherwise unmanageable bleeding within minutes, it does it without the need to apply pressure — usually critical after certain wounds to areas like the neck or head. The more blood absorbed — the quicker the clotting process.

And the bandage is stable for 24 hours, its creators say — enough time for getting patients, like wounded soldiers to hospital. Company CEO Yuval Yaskil: (SOUNDBITE) (English) YUVAL YASKIL, OWNER AND CEO OF CORE SCIENTIFIC CREATIONS (CSC) SAYING: “These products allows us to treat very severe bleeding in the field, with minimum amount of, I would say, training, with minimum amount of interfering with the regular medical treatment or protocols that are used today.” The company says it’s providing WoundClot to Israeli police forces and the army and selling it to hospitals for as little as $10 per bandage. Saving money — but also they hope…saving lives.