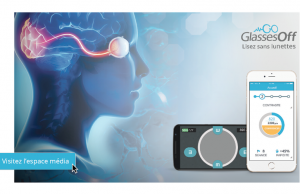 GlassesOff Inc. (OTCBB: GLSO) announced today the official launch of a localized language version of its app for French-speaking markets, which is available on both the iOS and Android platforms. The GlassesOff app is a neuroscience technology that enhances near vision performance through brain exercises, by using game-like challenges to stimulate the image processing center of the brain, ultimately aiming to enable users to avoid or eliminate the need for reading glasses. After leading ophthalmic publications in France, including Réflexions Ophtalmologiques and Cahiers D’Ophtalmologie, published articles discussing the scientific merits and user benefits of the GlassesOff technology, the company decided to launch its first customized app in French. The French language version of the GlassesOff app is available at the Apple App Store for the iPhone, iPad, and iPod Touch, and at the Google Play Store for Android phones.

“Innately, the GlassesOff app is a highly-personalized and interactive technology intended to provide meaningful feedback for the user. Providing customers with a version of the app in their own language is key to ensure optimal user experience and results,” stated Nimrod Madar, CEO of GlassesOff.  “In a survey conducted by The Gallup Organization for the European Commission in 2011, 9 out of 10 Internet users in the European Union (EU) said that when given a choice, they always visited a website in their own language. The study also reported that 44% of Internet users in the EU thought they missed interesting or important information because the websites they visited were not available in a language they understood.”

Mr. Madar went on to say, “We believe that localization is a critical success factor for our planned international expansion, and we expect to launch additional customized versions of the app in other regions.”

About GlassesOff
GlassesOff Inc. (OTCBB:GLSO) is public, a neuroscience technology company, utilizing patented technology to develop and commercialize consumer-oriented software applications. The Company is developing and commercializing next generation vision performance applications. GlassesOff has developed a proprietary, patent protected neuroscience technology platform to improve near vision performance through brain exercises, by improving the image processing function in the visual cortex of the brain. Through game-like challenges, the GlassesOff™ product aims to eliminate the dependency on reading glasses of people who experience the inevitable age-related changes in their near vision sharpness and reading performance.