Aerial missions and near vision: 32 fighter pilots overcome the limits of presbyopia 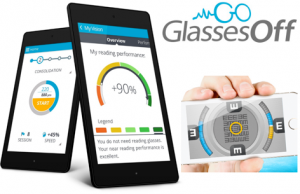 The scientific journal Vision Research publishes a study[1] revealing that even people with higher than average visual abilities can improve their near vision with the GlassesOff program. This brain training, based on perceptual learning, and adapted to each and every visual profile, led to 32 fighter pilots to observe significant improvement.

Several studies already proved in the past that the GlassesOff brain training can significantly improve near vision. This last scientific study shows than it can also improve vision of users selected for their advantage in their visual and cognitive abilities. In the Air Force, candidates must have 20/20 on their visual evaluation.

Yet, fighter pilots are also concerned by presbyopia, which begins to be noticeable after age 40. Because modern pilots rely on the displays of the aircraft control and performance instruments, near visual acuity is essential in the cockpit, thus, they still need optical correction for near activities during the flight. However, optical corrections limit their flying capabilities by affecting peripheral vision.

32 Israel Air Force pilots (mean age: 48), still in operation despite presbyopia, volunteered to participate to the study. They completed a 3-month training program with GlassesOff, after which their near vision improved until reaching a level similar to younger participants (mean age: 24), with excellent vision.

> Improvements generalized to higher-level tasks, such as speed of reading and aerial photography interpretation

Marc TIMBERT, retired fighter pilot from the French Air Force, also tried GlassesOff: “I wasn’t convinced of this method’s efficacy, but I tried out of curiosity. By the end of the training, I could read without reading glasses, and until today [more than a year later] I still can perform high-precision work without any near vision correction.”

After thirty years of research in the neuroscience field, and numerous articles in top scientific magazines, the neurotechnology company Eyekon E.R.D has developed and realeased the GlassesOff application. It is a unique smart device application used for the improvement of near sight, in order to eventually get rid of one’s reading glasses. It is available on Stores and supports iOS and Android.

GlassesOff is an application that works on brain plasticity. Its users train their visual cortex through entertaining exercises, which better the capacity of the brain to deal with the images that it constantly receives. That way, the optical deteriorations linked to the natural aging of the eye can be greatly reduced.

The neurotechnology company develops and sells software applications. Counting numerous first-rank Scientists and Digital Specialists, Eyekon E.R.D has created a technological platform that aims at boosting visual performance thanks to perceptive training. The product GlassesOffTM has been developed specifically to reduce or break the dependence on reading glasses by the people who start suffering from the effects of aging on their near vision after the age of forty. This innovative company has already raised 13M dollars since 2007.

The general quality of one’s sight relies on two things: the quality of the images that the eye perceives, and the ability of the brain to analyze those images. GlassesOff focuses on the cerebral part of the vision, by stimulating the neurons of the visual cortex, in order to develop the brain’s capacity to deal with the images. The result is a global progress in near vision function, and an increased facility of reading without glasses. The high efficiency of this method has been proven many times by different studies made in renown universities in the USA, Israel and Germany. Several leading magazines such as Nature, Scientific Reports, and Vision Research have dedicated publications to the application, and many vision professionals have referred to it in conferences organised by the ARVO*, the ECVP*, and the AAO*, amongst other organisations. (These are American and European scientific organisations on vision and ophtalmology, as will be detailed at the end of this publication. Finally, it has also received many prestigious awards.