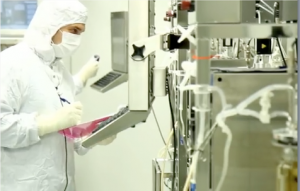 Pluristem Therapeutics Inc. a leading developer of placenta-based cell therapy products, has signed a Memorandum of Understanding (MOU) for a collaboration withFukushima Medical University, Fukushima Global Medical Science Center. The purpose of the collaboration is to develop Pluristem’s PLX-R18 cells for the treatment of Acute Radiation Syndrome (ARS), and for morbidities following radiotherapy in cancer patients. Effects of PLX-R18 will be studied in the lungs, gastrointestinal tract, skin, and bone marrow following exposure to catastrophic levels of radiation.

ARS is caused by exposure to dangerously high levels of radiation, such as could occur in a nuclear catastrophe, and incorporates potentially lethal damage to the gastrointestinal tract, lung, skin and bone marrow, as well as other systems. In this new collaboration PLX-R18 cells will be studied primarily as a potential treatment for radiation-induced damage to the skin, lungs and gastrointestinal tract. The parties intend to develop preclinical models of radiation damage in these tissues, and then use them in trials. Pluristem will contribute PLX-R18 cells and scientific knowledge, whileFukushima Medical University will conduct the studies, and provide the required resources.

The collaboration will proceed alongside research supported by the U.S. National Institutes of Health (NIH), which is studying PLX-R18 as a potential treatment for the hematologic component of ARS. Insufficient blood cell production by the bone marrow, which may be caused by various reasons including ARS and cancer treatments, can be life threatening because it may lead to hemorrhage, the inability to fight infection, and anemia.

“The researchers at Fukushima have a strong interest in cell therapies that may offer a treatment for conditions caused by exposure to ionizing radiation. We are honored to work with the thought leaders in the field atFukushima Medical University, Fukushima Global Medical Science Center to further develop PLX-R18 for ARS-related indications,” stated Pluristem CEO Zami Aberman.

“We anticipate that our work with Fukushima Medical University, Fukushima Global Medical Science Center will help to maintain the health of those involved in decommissioning the Fukushima reactors; the decommissioning process is estimated to take about 40 years.We hope that this collaboration can advance efforts to safeguard populations around the world from illness related to radiation exposure,” concluded Mr. Aberman.

PLX-R18 is Pluristem’s second cell therapy product in development. It is already being studied as a treatment for bone marrow that is unable to produce blood cells because of a variety of causes including: ARS; unsuccessful hematopoietic cell transplants; certain cancers; radiotherapy and certain chemotherapies used to treat some cancers; and immune-mediated bone marrow failure. Pluristem is applying for FDA approval of a Phase I trial of PLX-R18 in incomplete bone marrow recovery following hematopoietic cell transplantation. Pluristem will also be submitting a protocol for late-stage trials of PLX-R18 in the treatment of the hematological component of ARS, targeting the FDA’s Animal Rule regulatory pathway. With its capabilities, PLX-R18 could potentially treat a broad range of indications related to bone marrow function, which together constitute a substantial global market.

This press release contains forward-looking statements within the meaning of the “safe harbor” provisions of the Private Securities Litigation Reform Act of 1995 and federal securities laws. For example, we are using forward-looking statements when we discuss our expected collaboration with Fukushima Medical University Hospital, when we discuss our expectation to initiate an animal model to study the potential of PLX-R18 cells to treat high-dose radiation therapy, when we discuss our hope that the collaboration with Fukushima Medical University Hospital will advance efforts to safeguard populations around the world from illness related to radiation exposure, when we discuss our plan to submit a protocol for late-stage trials of PLX-R18 in ARS, targeting the FDA’s Animal Rule regulatory pathway, and when we discuss PLX-R18’s potential to treat a broad range of indications related to bone marrow function, which together constitute a substantial global market. Except as otherwise required by law, Pluristem undertakes no obligation to publicly release any revisions to these forward-looking statements to reflect events or circumstances after the date hereof or to reflect the occurrence of unanticipated events. For a more detailed description of the risks and uncertainties affecting Pluristem, reference is made to Pluristem’s reports filed from time to time with the Securities and Exchange Commission.