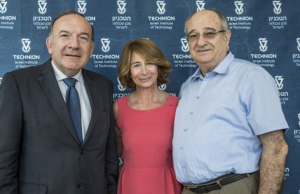 The President of the MEDEF (National confederation of French employers), Mr. Pierre Gattaz spent the morning of May 16 at the Technion, surrounded by a delegation of high-level business leaders to discover the entrepreneurial culture, Start-ups and research developed at the Technion, on the occasion of his four days traveling in Israel, the Palestinian Territories and Jordan.

Speech of Mr. Pierre Gattaz at the Technion © Neal Badache

Mr. Pierre Gattaz on the Technion campus with french speaking students © Neal Badache
Accompanied by Muriel Touaty, the CEO of the Technion France and welcomed by the President of the Technion, Professor Peretz Lavie and Vice President of Research, Professor Wayne Kaplan, Mr. Pierre Gattaz and his delegation met with teachers from different Technion faculties: Biomedical and Mechanical Engineering as well as the laboratory of robotic medicine and of biomechanics and Biorobotics.

Mr. Pierre Gattaz and his delegation at the Faculty of Mechanical Engineering of the Technion, in the laboratory of the Professor Alon Wolf, “father” of the snake robot © Neal Badache

Mr. Pierre Gattaz and his delegation also attended a presentation on the theme: “From the Lab to the Market Place” by Benjamin Soffer, the Director of the T3: Technion Technology Transfer and David Shem-Tov, the Director of Start-up Accelerator Technion (T-factor), who recently signed a partnership agreement with the X-Up Accelerator from Ecole Polytechnique in September 2015 at the Ministerial Visit of Emmanuel Macron at the Technion. This trip will be the origin of meetings between the Israeli entrepreneurial fabric and French economic ecosystem and emphasizes the strengthening of the Franco-Israeli cooperation and accelerating the exchange of knowledge and expertise, undertook by the numerous economic partnerships and research already set up.

Muriel Touaty, CEO of Technion France, said : “Pierre Gattaz and the Medef delegation this morning at the Technion: a special visit combining innovation panels, presentations of technologies in the water and energy fields, on technology transfer and enhancement of the research “made in Technion”, on the Vision of education and training of students and visits of the robotics laboratories especially  with a presentation of the Snake Robot. Thank you to Pierre Gattaz, for his motivation to combine our two ecosystems to generate growth by companies. The win-win-win, the last one being the Human place in the bilateral cooperation. Thank you to the entire delegation of the MEDEF, Olivier Gainon Philippe Gauthier and Matthew Starling, of the Embassy of France in Israel and last but not least, to my President the Professor Peretz Lavie, all the Technion professors and the Francophone students in exchange thanks to cooperation established with schools and universities in France. The academic and economic relationship between our two countries is more than ever in motion. “