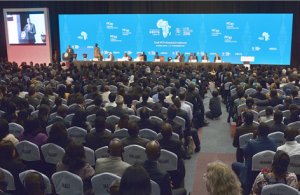 Israel and Mauritius were the only two countries in the Africa, Near and Middle East to take part in the Ministerial Conference of the WTO on the fall schedule of tariffs on ICT products, held in Nairobi December 16, 2015. at this conference, participants announced the conclusion of talks to liberalize trade in products of information technology beyond the original ATI 1996.

The WTO‘s 10th Ministerial Conference was held in Nairobi, Kenya, from 15 to 19 December 2015. It culminated in the adoption of the “Nairobi Package”, a series of six Ministerial Decisions on agriculture, cotton and issues related to least-developed countries (LDCs). The Conference was chaired by Kenya’s Cabinet Secretary for Foreign Affairs and International Trade, Amina Mohamed.