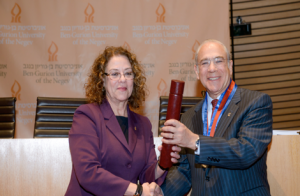 “Shimon Peres would tell me about David Ben-Gurion’s vision to turn the Negev into a garden. I am much more impressed by the fact that the Negev is being planted with education, knowledge, ideas, innovation, and the seeds of the future by Ben-Gurion University of the Negev. It is a pleasure to be here to receive this award and see how you have transformed the desert, the promised land, for the future of Israel and the future of the world,” Gurría declared in the presence of National Infrastructures, Energy and Water Resources Minister Dr. Yuval Steinitz. Permanent Representative of Israel to the OECD
Ambassador Carmel Shama Hacohen was also in attendance.

“I know that I am joining a small, and exceptionally distinguished circle, including President Shimon Peres, whom I have welcomed personally to the OECD in Paris. A giant of international diplomacy, a fighter for peace and prosperity. To be invited to follow in his footsteps, in his own country, is an honour that will stay with me for many years to come,” Gurría continued.

He said he considered Israel’s inclusion in the OECD as a major achievement of his first term as secretary-general.

“I am also touched because it is the year that we celebrate the fifth anniversary of Israel’s membership of the OECD. The accession of Israel to the OECD was a very important achievement of my first mandate. This award constitutes a symbol of our enduring friendship, and our shared commitment to a prosperous and inclusive Israel.

“In these short five years, Israel has become an important contributor to the OECD’s work. Its expertise on key areas of our economies, like water management, “clean tech”, innovation and entrepreneurship, has become a source of best practices. We have even worked together on “Clean-Tech Clustering” here in the Negev Region, underpinned by the research capacity and quality at Ben-Gurion University,” he noted.

Steinitz pointed to two “miracles” that Gurría had accomplished as OECD Secretary-General so far. The first was transforming the OECD into “one of the most appreciated and respected global organizations.” The second was Israel’s accession to the OECD, which had to garner support from at least 31 member countries some of which had strained relations with Israel in 2010.

The Ben-Gurion Leadership Award honors forward-looking visionaries who not only possess vision but work to make their vision a reality, Prof. Dan Blumberg, VP and Dean, R&D said at the opening of the ceremony in the W.A. Minkoff Senate Hall on the Marcus Family Campus in Beer-Sheva.

“The local population is quite diverse and the University is taking that into account as it helps the Negev take the unavoidable leap into the global arena,” Blumberg said.

Prof. Carmi called Gurría a “role model” who “embodies the values of the award” especially his emphasis on green growth and gender issues.

On Sunday, Gurría presented two reports that would act as a “mirror” to the Israeli Cabinet showing the strengths and difficulties of Israel’s economy and society as an encouragement to make change.

Referring to those reports, Carmi added, “Development of the Negev has the potential to address the issues raised by the OECD.”

Turning to the nature of leadership, Gurría expounded, “Leadership is what this award recognises. I am deeply gratified and touched by this honour because I see it as an endorsement of [my] vision for a more global, more relevant, more far-reaching OECD; one that can learn the lessons of the crisis and redefine the growth narrative, reverse the growing inequality and put the well-being of people at the centre of our efforts.

“Leadership is also key to upholding one of the most precious assets that a country can have: trust. Trust is the cornerstone of effective governance, the main ingredient to promote economic growth and social progress. But like never before, our countries are running dry of this precious asset. Like never before, our citizens have doubts about their government’s capacities to make the right decisions, to address MY problems! And like never before, we need effective, tireless, committed leadership to recover that confidence. And to do that we also need our leaders to promote progress through more inclusive growth. Inequalities are undermining our economic systems and our social fabric,” he argued.

Gurría offered some numbers to bolster his argument.

“In OECD countries the average income of the richest 10% is now almost 10 times that of the poorest 10%. 25 years ago, it was 7 times: that’s a 40% increase in one generation. Here in Israel the latest figure stands at almost 15 times. And, here, like in my own country, Mexico, around 20% of the population was classified as ‘income poor’. This is not only a human tragedy, it’s also increasingly evident that it’s bad for economic growth. Armed with this insight, the OECD has been leading the way to understand, measure and promote better quality growth, more inclusive growth.

“Skills are the currency of the 21st Century,” he said highlighting the need to include the Arab-Israeli and haredi sectors in the workforce and to level the playing field to achieve social cohesion and well-being.

“This recognition from Ben-Gurion University gives me the encouragement and determination to continue taking the OECD in new directions, to continue growing our membership, to continue going beyond GDP, to continue empowering people with education and skills, to continue tackling inequality, to continue recovering the trust of our citizens. I accept this award on behalf of all my colleagues in the OECD who work day in and day out to drive this vision forward. We will keep working with Israel, to ensure that this aspiration for a more inclusive society can become a reality,” he concluded.

Past recipients of the Ben-Gurion Leadership Award include then president of Israel Shimon Peres in 2014 and founder of the Adelis Foundation André Deloro and then Deutsche Telekom CEO René Obermann in 2012.