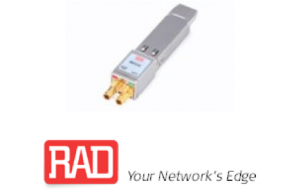 Following extensive testing of the device conducted over the past few months, including in live operational sites, the service provider decided to deploy hundreds of units in its LTE network as the first step in a much larger, countrywide deployment that will continue through 2016.

The Institution of Engineering and Technology (IET), the largest multidisciplinary professional engineering institution in the world, has cited MiCLK as “the first solution that truly allows placing a large number of distributed PTP Grandmasters across a wide area mobile network while still being CapEx-affordable.” In its commendation, the IET called it “an ideal option for 4G service providers looking for a quick, cost-effective way to bring accurate synchronization to small cells.”

The finger-size MiCLK requires no pre-configuration. It begins to work instantly when plugged into an SFP port on a service router or any other networking device. Using a Distributed 1588 Grandmaster (Distributed GM™) model, it distributes frequency and time throughout the network and provides phase and Time of Day (ToD) in full compliance with the stringent requirements of 4G and 5G networks.

“MiCLK is ideal for rapid 4G roll-outs because it eliminates the need for an expensive Grandmaster appliance and forklifting the entire network for synchronization,” explains Franck Darmon, RAD’s Vice President of International Markets. “Moreover, the Distributed GM concept behind the MiCLK dramatically reduces installation and operational costs by eliminating the need for additional cabinet space, a separate power source and a GNSS receiver at every cell site.”

RAD will be exhibiting its entire SAA solution, including MiCLK, at Mobile World Congress 2016, which is being held February 22 to 25 in Barcelona.

RAD is a global Telecom Access solutions and products vendor. Our Service Assured Access solutions for mobile, business and wholesale service providers are designed to improve the way they compete: service agility to minimize time to revenue, complete visibility of network performance for greater operational efficiency and better QoE to reduce churn. We are at the forefront of pioneering technologies, such as Distributed NFV-based vCPEs, MEF Carrier Ethernet 2.0, performance monitoring for any network, hardware miniaturization, and timing synchronization over packets. Founded in 1981, RAD has an installed base of more than 14 million units, and works closely with Tier 1 operators and service providers around the globe.

RAD is a member of the $1.25 billion RAD Group of companies, a world leader in communications solutions.