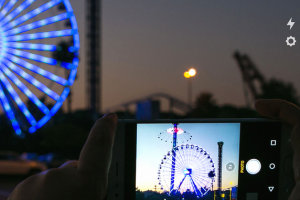 While smartphone cameras have come on in leaps and bounds in the last few years; zooming capabilities are still lagging behind those of a solid compact camera.

While some phone manufacturers are toying with the idea of including optical zoom lenses on their handsets, digital zoom is still absolutely dominant. That generally means diminishing quality of image, the closer users attempt to get to the subject.

Now, Samsung is reportedly looking to do something about it, with the company said to be in talks to acquire optical zoom specialists Corephotonics for around $150m (around £113m), according to the Israeli publication Globe (via SamMobile).

The company, also from Israel, works on dual camera technologies. They worked with Chinese manufacturer Oppo to create a prototype, periscope-style camera with 5x optical zoom capabilities. That means it’s possible to get much closer a subject without losing any visual fidelity.

Oppo unveiled the tech called 5X Dual Camera Zoom back at MWC 2017, but it is yet to make it into a consumer smartphone. The company teamed with Corephotonics to tackle the key barrier to including optical zoom in smartphones – the inability to fit an optical zoom system into a slim smartphone. As such, the company turned the zoom element sideways and essentially created a periscope.

Oppo’s rumoured F19 Pro smartphone is actually tipped to include a 10x optical zoom, with a launch considered to be imminent.

Should Samsung end up building this technology into future phones effectively, it would provide a massive upgrade incentive to those who truly care about smartphone photography, although the company hasn’t yet commented on the reported acquisition.

Samsung’s next-gen smartphone, the Galaxy S10 Plus is set to rock a tri-lens rear-facing camera, which also promises to bring the range’s photographic capabilities to new levels.