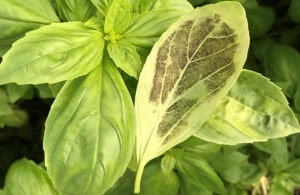 Sweet basil, a favorite culinary herb under attack from a global epidemic.

Italy without tomatoes, Ireland without potatoes and the United States without filter coffee – these are all unimaginable culinary nightmares.

To these scenarios we can add a world devoid of basil, meaning no pesto, no Caprese salad and no yummy fresh leaves mixed into our salad or melted with butter onto steaming hot garlic bread. The horror!

And not an inconceivable horror, either. Recent years have seen severe damage to sweet basil crops all over the world following a downy mildew epidemic that causes deformed leaves and chlorotic lesions.

Luckily, a new Israeli invention is on hand to ensure we can all continue to stir the delicious fresh herb into our pasta.

The severity of the downy mildew epidemic, which first appeared in Israel in 2011, led researchers from Bar-Ilan University and seed specialists at Genesis Seeds to investigate how the leaf fungus is transmitted.
Basil infected with downy mildew.

“Basil worldwide has been afflicted in recent years by a new disease that can’t be treated with chemical spraying because of regulation,” says Prof. Yigal Cohen, an Israel Prize-winning researcher at Bar-Ilan University.

“Therefore there was a need to find other ways to overcome the disease.”
“To this end we went down the genetic route – that is, we searched for genes that are resistant to the disease,” he explains.

“And where did we look? We looked for them in a very wide collection of sweet basil from all over the world. We didn’t find any resistance there. So we looked through a large collection of wild basil, and there we found three very resistant wild types.

“We took these wild species and tried to transfer the genes to the sensitive cultivars. We did it in non-GMO methods, since it’s prohibited to do GMO to crop plants in Israel,” Cohen says. Instead, the researchers used a classic breeding method.

“And then it became clear that it’s impossible, because these wild species have a different number of chromosomes than cultivars. They’re non-crossable. We therefore turned to another method to create crosses that can’t produce plants, but we extracted the embryos from the crossed plants before they were aborted.”

“We’re in fact the first in the world to develop resistance in basil against this disease,” Cohen says of his team’s new species.

“It’s a very, very epidemic disease. What we did was very timely.”

Bar-Ilan University and Genesis Seeds are now commercializing the new sweet basil cultivar under the trademark “Prospera” through BIRAD Research & Development Company, the commercialization arm of the university.

Cohen explains that the leaf fungus spreads across the globe via fresh material transport, infected seeds and even drifting winds. In many cases, the disease goes unnoticed because it remains “dormant” during harvest and emerges only a few days later.

The new resistant seeds are sure to be used locally, as Israel is one of the major winter exporters of fresh herbs to Europe, Russia and the eastern United States. Israel exports more than $80 million worth of fresh-herb products each year, half of them based on sweet basil grown in the Negev and Arava deserts and the Jordan and Beit She’an valleys.

Genesis Seeds says that despite the relatively high cost of the resistant seeds, consumers won’t end up paying more for their basil.

For those worried about the taste, Cohen explains that they managed to get it right through a lot of work and cross-breeding.

Pesto, by the way, is Cohen’s favorite way of consuming basil. “Just like everyone else,” he chuckles.