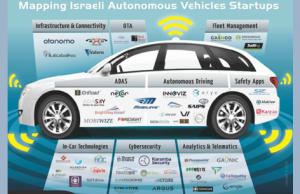 Following a series of articles about the Israeli high-tech sector’s smart car revolution, an investor in a large venture capital fund called me a few days ago. He wanted to warn me that a bubble was being created. “Every local company in the field founded a year or two ago by two or three friends is now behaving like the next Mobileye (NYSE: MBLY) or Waze,” he complained. “Financing rounds are taking place at astronomical values, sometimes even before the companies have any revenue, not to mention profits. Even blue chip companies generating solid and growing revenue aren’t being priced like that.”

It is indisputable that a considerable proportion of the values on which today’s investments and acquisitions of auto-tech companies in Israel and worldwide are taking place are based mainly on potential future revenue. There is now a fashionable and glittering global buzz surrounding the widely reported and environmentally friendly autonomous vehicle that is attracting venture capital investors like fire attracts moths. A car, however, is not just another consumer product. It has unique features and a $1.5 trillion industry behind it currently in an accelerated pursuit of change. Beyond the direct and obvious potential derived from annual mass production of tens of millions of vehicles, every product or technology that succeeds in penetrating this sector creates around it an entire dependent system of manufacturers, byproducts, and suppliers. High-tech people like to call this by the fashion term of “ecosystem.”

The business potential of the smart car for the new players therefore far exceeds what is visible to the naked eye. In order to highlight this potential, I will focus on several examples from both the technological and financial realms.

Auto cyber security: A basis for the next Check Point?

Five or six years ago, the concept of “cyber security for cars” simply did not exist in the auto industry. Although many models in recent years have been equipped with smart multimedia systems and interfaces that enabled vehicle fleets to manage their vehicles and manufacturers to make revisions remotely, the auto industry considered the auto environment to be isolated and safe, with minimum risk of hostile external penetration.

As cars became smarter and more connected, the risks multiplied. The ultimate future threat is a hacker attack on autonomous cars liable to take control away from the driver. Every manufacturer now planning an autonomous car sometime in the next four or five years must therefore protect it from such a scenario. The truth is, however, that it is not necessary to look too far ahead, because the cyber threat to vehicles already exists in the present. We will disregard for the moment the recent reports about the methods developed by the CIA in recent years for creating an external wireless connection to existing vehicles and extracting from them sensitive information about the driver.

On a national level, tens of thousands of drivers are currently dependent on wireless navigation apps to reach their destinations. An external penetration into the mass-based navigational networks could disrupt traffic in cities and entire countries at a strategic level. The huge traffic jams created several weeks ago on the road to Jerusalem by a Waze software problem (apparently an internal one) illustrates this risk very well.

A current study by Deloitte summarizes this better than I can: “As the complexity of vehicles continues to increase, the potential of external attacks on them also becomes greater. One vulnerable component can leave the car’s entire internal system exposed to attack, and the potential damage varies from inconvenience for the driver to massive malfunctioning of the car. In view of these challenges, the automakers must remain secure and alert.”

Regulators around the world are now working overtime to establish standards requiring the auto manufacturers to use safe components and secured communications protocols in every future mass produced car. In itself, this is now creating business potential for the sale of hardware and software components for millions of vehicles. This, however, is only the tip of the long-term revenue iceberg. The worldwide regulation now emerging will require the auto manufacturers to make regular updates for new threats throughout the vehicle’s lifespan, whether or not the customer wants it, and even without his being aware of it. The potential revenue model of this technology is therefore more similar to the model of constant stream of revenue enjoyed by anti-virus companies and Check Point Software Technologies Ltd. (Nasdaq: CHKP) than that of producers of chips for cars. It is also reasonable to assume that a high-tech company that succeeds in having its protective system strike roots in the production line of some auto manufacturer will have a business status comparable to that of a Catholic marriage.

In the business sphere, the large auto makers and their (tier-1) suppliers are the main “natural” customers for companies in the developing Israeli auto-tech industry. They are also the ones likely to provide most of the revenue and most of their investments. The real picture, however, is much broader than that. For the sake of analogy, I will give three examples of the hidden potential of strategic investments in Israeli auto-tech by companies from different sectors – all of them during the past month.

In ordinary times, the easiest example could be considered a very important event. Early this month, ON Semiconductors, a chip giant listed on Nasdaq with a $6.5 billion market cap, announced the establishment of an R&D center in Israel for smart car components. The founding of the center follows the acquisition of IBM’s proximity sensors R&D activity and patents in Haifa.

The company’s announcement read, “We are preparing to supply a wide range of sensory and technological products that will meet the customers’ demand for completely autonomous vehicle solutions. The acquisition will create a new ON Semiconductors development and design center in Israel, which will report directly to the company’s vehicle solutions division as part of the vision sensors group. Located in Haifa, the new development center includes the personnel, equipment, research facility, and intellectual property.”

In normal times, a report about a major chip company making a smart car investment in Israel would have made waves. Given the current stream of global investments in this sector, however, it barely made it onto the radar screens. In any case, it does not detract from the hidden significance here: global chip companies also want a share of Israel’s smart car pie.

A second example is South Korean company Samsung Electronics, the world’s second largest IT company, with $194 billion in revenue and a $12.1 billion annual investment budget. Samsung Electronics president and chief strategy officer Young Sohn visited Israel early this month. His visit focused on the company’s investments in auto technology. Samsung Electronics recently acquired vehicle audio-video concern Harman, which has strong roots in Israel, for $8 billion. Sohn made very clear that what the company is now looking for in Israel, saying, “We won’t build cars; we’re interested in applying our technology to the creation of a smarter car.” He estimates the markets related to the smart car – from connection to the cellular market to connection to the smart home – at over $100 billion. Samsung Electronics has invested in dozens of Israeli companies in recent years. Of its nine investments over the past year in smart car companies, three were in Israel…