Israel Hayom. A groundbreaking development may provide a solution to millions of celiac sufferers 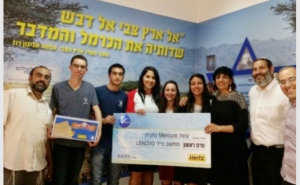 Israel Hayom: Students at the AMIT Bar-Ilan boys high school in Netanya, in cooperation with students from the Ulpanit Netanya girls school, have been awarded the Ness Technologies first prize this week for technological leadership development for inventing a groundbreaking development that may provide a solution to millions of celiac sufferers.

The group of students includes Roei Vaknin and Or Keinan from AMIT Bar-Ilan, alongside Ophir Cohen, Ortal Cabilio and Hodaya Mesika from Ulpanit Netanya.

Celiac disease is an autoimmune disorder of the small intestine that is caused by a reaction to gliadin, a prolamin (gluten protein) found in wheat, barley and rye. The disorder interferes with absorption of nutrients from food and sufferers of the disease cannot tolerate any foods containing gluten.

As part of their science and technology studies, the students developed a treatment based on guided nanoparticles that break the proteins apart and remove them from the gastrointestinal tract. The treatment enables gluten-sensitive patients to eat foods containing gluten without damaging their health.

Experts who attended the conference said there was a technological and scientific feasibility to promoting the invention and that if it succeeds it could dramatically change the lives of tens of millions of celiac patients worldwide.

“We worked together in complete cooperation until we reached a solution,” student Or Keinan said. The principal of AMIT Bar-Ilan, Rabbi Yuval Elimelech, congratulated the winners and said that “the group succeeded in combining personal excellence with values of selflessness and fellowship to which we aspire to educate.”