Technion & Microsoft: the Internet of Things 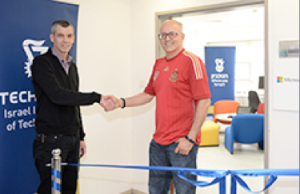 The physical appearance and technology infrastructure at the lab are designed to resemble the work environment of a startup company, with all the latest computer equipment, including smartphones and tablets for running applications during their development. The clean design lines of lab simulate those of a real high-tech company, and give the students the feel of an authentic development environment of an R&D center or a startup company. 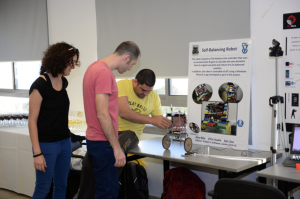 The first course held at the lab was on programming systems in an Arduino environment, under the guidance of Prof. Yossi Gil with support from Microsoft experts. As part of the course, which was designed to challenge the students with independent product building projects, the students designed smart systems combining hardware and software based on Arduino controls, connected to Azure – Microsoft’s cloud. The projects exhibited at the launching of the lab included: a musical glove that responds to color and plays sounds that correspond to various colors; a sensor for using hand gestures to control a telephone during driving; a smartphone application for guiding the visually impaired, and more.

The university is developing the most important resource for Israeli industry,” says Yoram Yaacovi, General Manager of Microsoft R&D Center,

“Highly qualified computer engineers. For this reason it’s important for us to continue initiating projects with Israeli universities, in order to support innovation in academia and to increase the number of graduates who complete their studies each year at the computer science and engineering faculties. Strengthening the ties between academia and industry is vital not only to the universities, but also to industry, which is nurtured by the originality and sharp-mindedness created by Israeli universities year after year. These are the properties that are the growth engine for the Israeli high-tech sector.”

“The course is an incubator for initiative and originality,” says Prof. Yossi Gil, who heads the course. “We give the students the equipment, guidance and tools, in order for them to take the next step. We tell them, ‘You’re talented – surprise us.’”

This endeavor at the computer science faculty is part of the ongoing collaboration between Microsoft’s R&D center and the Technion. In the framework of this collaboration, Microsoft and the Technion have opened an academic research center for ecommerce studies. The lab and the research center are part of U.next – a comprehensive program run by Microsoft’s R&D center, focusing on Israeli academic institutions, students, and researchers. The program includes support for the students, educational programs, research grants, access to Microsoft tools and resources and the hosting of workshops and conferences. The program’s goal is to encourage academic excellence in research and study through leverage of the company’s abilities and resources.