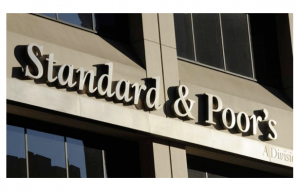 The international ratings agency Standard & Poor’s on Friday affirmed Israel’s credit rating as A+, giving the local economy a stable outlook. This was the second positive rating since S&P representatives visited Israel in June 2014. The agency said it based its credit rating and economic outlook review on its belief that Israel’s economic growth and fiscal stability projections would remain unaffected by the results of the March 17 elections.

Sources in the Finance Ministry said S&P analysts projected the Israeli economy would resume its 3percent growth rate in 2015, after noting 2.5 percent growth in 2014. The dip in growth rates in 2014 has been attributed to last summer’s Operation Protective Edge in the Gaza Strip, which affected market investments in the third fiscal quarter.

S&P ratings are affected by geopolitical risks and their potential economic ramifications, especially the response of foreign investors and the international community to market fluctuations.

The rating agency’s review said that the tensions on Israel’s northern borders, as well as the aftermath of the Gaza campaign and the precarious security situation in Judea and Samaria will spell an increase in defense spending in 2015, regardless of the political makeup of the next government.

S&P further predicted that government deficits between 2015 and 2018 were likely to slightly exceed projections and come to 3 percent of the gross domestic product.

Finance Ministry Accountant General Michal Abadi-Boiangiu commented on S&P’s ratings Saturday, saying, “The decision to affirm Israel’s credit rating attests to the strength of the Israeli economy, as well as to its resilience to various shocks, including security events.”

Meanwhile, the Central Bureau of Statistics is scheduled to release its consumer price index for January on Sunday afternoon.

The CPI is expected to rebound slightly only in April, as consumer activity traditionally grows ahead of the Passover holiday.

Finance Ministry economists’ inflation projection for 2015 was set at 0.7 percent, while the Bank of Israel has pegged it at 1.1 percent. Though slightly different, both forecast the coming year’s inflation rate on the lower side of the government and the Bank of Israel’s official inflation target, set at 1 to 3 percent.