Hebrew and Harvard Universities: A ‘GPS’ to Navigate the Brain’s Neuronal Networks 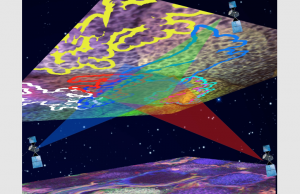 For more than a century, neuroscientists have tried to uncover the structure of the brain’s neuronal circuits in order to better understand how the brain works. These brain circuits, which perform functions such as processing information and triggering reflexes, are comprised of nervous system cells called neurons that work together to carry out a specialized function. Neurons send the messages to other neurons, or to target tissues such as skin and muscle that they innervate, via specialized wire-like processes called axons.

Now, scientists from Dr. Alex Binshtok’s laboratory at the Hebrew University’s Faculty of Medicine and Dr. Jeff Lichtman’s laboratory at Harvard University have described a method to map the location of the axonal branches (“arbors”) of many individual neurons simultaneously, at the resolution of

individual axons. Thus, by “seeing” many axons in the same preparation, it becomes possible to understand how specific neurons in one region are wired to other neuronal types and other regions.

This new approach makes it possible to learn about organizational principles of neuronal networks that would otherwise be difficult or impossible to study.

The research was conducted by Dr. Shlomo Tsuriel, a postdoctoral fellow from Dr. Alex Binshtok’s lab and the study’s lead author, with help from student Sagi Gudes, under the guidance of Dr. Binshtok at the Hebrew University’s Faculty of Medicine (Department of Medical Neurobiology at the Institute for Medical Research Israel Canada) and at The Edmond and Lily Safra Center for Brain Sciences. The research was conducted in collaboration with Dr. Jeff Lichtman from Harvard University’s Center for Brain Science and Department of Molecular and Cellular Biology.

Instead of trying to trace entire neurons all the way from the axon tips to the cell body, Dr. Tsuriel labeled only the cell body, but in a way that indicates the locations of its axonal branches. To that end, he used multiple injections in overlapping regions of a target tissue, with three or more differently colored retrograde tracers.

At each point the tracer was injected in a high concentration and spread to the area between the injection points, such that each area in the target tissue had a different color combination depending on its distance from the injection site. Axons innervating each area took up the dyes and transported them in small vesicles to the cell body, such that each vesicle had a color combination reflecting the area it was taken from. A few hours after the injection, each neuronal cell body was filled

with vesicles in a variety of colors reflecting the colors in the areas that these neurons innervate. Thus, based on the combinations and intensities of the colors in the individual vesicles transported to the cell, the projection sites of the axon can be outlined.

This approach is in some ways analogous to the principle used in a Global Positioning System (GPS) receiver, which uses distances from three or more satellites to triangulate its position. For this reason the new technique was called “Neuronal Positioning System” (NPS).

The description of this new method is presented today in Nature Methods as “Multispectral labeling technique to map many neighboring axonal projections in the same tissue”.

According to Hebrew University’s Dr. Alex Binshtok: “The new method that we developed allows us to answer a ‘big question’ in neuroscience about the organizational principles of neuronal circuits. Using the NPS technique that maps many axons in same tissue, we now can study what defines the routes along which the neurons will send their projections, as well as their targets. We can also learn how the wiring of the neuronal circuits changes during development and in a variety of pathological conditions. The answers to these questions will be the first step to comprehending how the information flows and is processed in the nervous system, and how changes in the neuronal organization affect neuronal function. I believe many scientists will find the NPS approach useful to help them answer the question of how the brain works.”