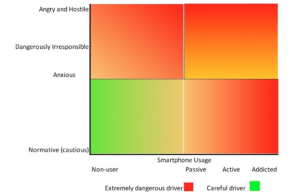 Ben-Gurion University of the Negev’s Dr. Eli Rohn and six of his students have developed a sophisticated computerized system that classifies drivers based on their driving style and phone usage while driving. The computerized system uses a smartphone’s sensors to collect data in real time while driving and stores it in a cloud-based database. The data is then analyzed over time using a set of algorithms for the production of several outputs: first, classification of the driver’s driving style on a continuous scale: anxious, cautious, dangerously irresponsible, angry and hostile. Second, classification of the driver’s level of smartphone usage on a continuous scale:  non-user, passive, active. The system also offers a third output: feedback for the driver on their smartphone. The feedback can be for a specific trip or for an accumulation of trips.

Additionally, the system provides the authorities a rare opportunity to reward young responsible drivers with added privileges, and at the same time better enforce “young driver” regulations. The system could be used by automobile insurers and accident investigators, assuming the proper legislative environment exists.

Identifying non-normative drivers before they develop a record of traffic violations and accidents can be life-saving. It provides an opportunity for remedial training and awareness of one’s driving style and

level of addiction to the smartphone while driving. Reducing the number of times drivers text or surf the internet while the vehicle is in motion could help in fighting a phenomenon that has become a pandemic.

To verify the proof of concept and to assess the system’s accuracy, the team from the Department of Information Systems Engineering used the system in three different vehicles, with three different drivers. Test drives collected over 10,000 driver events in urban, rural and highway environments. The vehicles used were a sedan, a bus and a motorcycle. The data collection portion worked flawlessly, including periods where data communications was interrupted. The maneuvering classifier and the cellphone addiction classifiers proved to be reliable and accurate, as did the driver’s feedback mechanism.

The app was developed for Windows phones and Dr. Rohn has applied for a research grant to continue develop the system on Android and iOS (Apple). If approved, it could provide the basis for yet another startup Dr. Rohn has initiated.