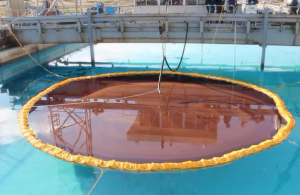 Nocamels. We’ve all seen it on the news: tragic oil spills that destroy entire marine ecosystems, often spreading hundreds of miles within the first 24 hours. Just last month, a ruptured pipeline in California leaked over 100,000 gallons of crude oil along the coast of Santa Barbara. According to the US Environmental Protection agency, tens of thousands of oil spills occur every year, and the prevention technology to deal with their aftermath has not changed in over three decades. Moreover, recovery rates continue to hover just below 15 percent, a figure that has not improved much over the years, making many of the cleanup efforts seem almost futile.

Israeli startup company HARBO Technologies aims to tackle this devastating environmental problem using an easy-to-use “floatie” it has developed, which can contain an oil spill in less than one hour. It simply circles the spill and “encapsulates” it; then, the oil “stain” is lifted and disposed of – away from the water. HARBO’s 100-foot prototype “boom” (floating barrier) contains up to two tons of crude oil overnight, without leaking, according to the company. In the future, each location will have 6,000 feet of boom, which can contain 800,000 gallons of oil (25,000 tons). This new tech is an alternative to the traditional technology used to respond to oil spills in the ocean.

Until now, oil cleanup teams have attempted to contain spills with much heavier containment booms until they’re skimmed, dispersed, or burnt on site. This drag-contain-dispose protocol is the traditional method of cleaning up oil spills, which has barely changed in half a century.

The existing technology is considered bulky, sometimes weighing up to 10kg per meter, according to co-founder and CEO of HARBO Technologies, Boaz Ur. Teams typically take at least 10 hours to respond to a crisis, a time frame too long to be efficient. “By then, oil can spread too far and too deep to be contained and dealt with,” he tells NoCamels.

HARBO says its solution is less bulky, easier to operate, and requires minimal training for on-site personnel, This, in comparison to traditional oil booms, would be able to cut response time down from hours to just about 20 minutes. The size of a lifeboat, HARBO’s oil containment technology is optimized for any type of wind, current, or wave conditions.

However, the company is keen to point out that it is not looking to replace current prevention technology, but to add an extra emergency layer. “The introduction of the sprinkler didn’t stop the use of firetrucks”, Ur says, and likewise implementation of HARBO’s alternative tech doesn’t mean the end of today’s oil spills prevention.

In order to prove its concept, HARBO’s team put their solution to the test in late 2014 in the Ohmsett testing facility in New Jersey, which is operated by officials from the US Department of the Interior to test oil spill solutions and response methods. After that initial test proved successful, HARBO is now approved to provide oil spill solutions in several US areas. The idea was born after a spill in Southern Israel back in June 2011. HARBO’s founders tried then to apply ocean spill solutions to land leaks, only to find that they were outdated. That’s why the team began to work on a new solution, and in October 2013 received a $60,000 grant from the Office of the Chief Scientist of Israel. Since then, HARBO has raised $190,000 from private investors (a $2.5 million round is underway) and has been through over 40 prototypes of its technology.

HARBO has passed the initial phases of patenting its technology, with patents pending in 30 countries – including the US, Canada, China, and most of Europe. Ur says he is expecting the first patents to be granted within the next 12 months. By the end of 2016, HARBO expects to have its technology commercially available, at which point a price will be set. According to Ur, there are “over 50,000 potential installations for our technology – including oil rigs, tankers, large ships, and coast guard response teams,” which means the market for HARBO’s solution is huge – and so is the company’s potential to save our oceans.