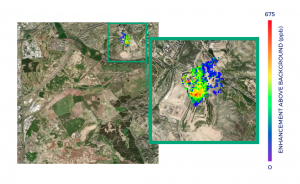 A demonstrations of the abillities of the satellites from a landfil in Madrid. Credit: LGHGSat, SRON Netherlands Institute for Space Research, ESA (European Space Agency)

Measurements carried out in one of the landfills in Israel raise the concern that the calculations on the basis of which methane greenhouse gas emissions are estimated do not accurately reflect the real emissions. Why does this cause so much concern, and what does the Ministry of Environmental Protection intend to do about it?

Decision-makers in Israel continue to set targets for reducing greenhouse gas emissions, with the aim of mitigating the climate crisis. It has recently been suggested that methane gas emissions (the second most important greenhouse gas affecting global warming, after carbon dioxide) from the natural gas industry in Israel are 50 times higher than estimated by the Ministry of Energy (the Ministry of Energy rejected these claims). Now, measurements conducted in one of the landfills in Israel raise real concerns that there are significant discrepancies between the reports of methane emission estimates from landfills reported to the Ministry of Environmental Protection, calculated on the basis of accepted international models, and the extent of actual emissions.

Organic waste that is landfilled undergoes anaerobic decomposition in the absence of oxygen, and therefore emits a flammable gas mixture called “landfill gas”. Landfill gas usually consists of about 50% methane and about 50% carbon dioxide, and a small fraction with other gases. Because methane greenhouse gas heats the atmosphere tens of times more than carbon dioxide, landfill gas is sometimes burned to reduce greenhouse gas emissions from landfills, or even used to produce energy. Methane is also a secondary air pollutant, which causes the formation of ground-level ozone air pollution.

In the abovementioned measurements, conducted last summer by SP Interface, led by Dr. Daniel Madar, it was found that the amount of methane emitted from the landfill is 6 times greater than the emission estimates reported by the landfill to the Ministry of Environmental Protection. The measurements were performed using satellites of the Canadian company GHGSat, which measure high-resolution and high-precision methane emissions. “These are preliminary results from a small number of measurements – but the satellite company has continued to measure the methane emissions in the landfill every week for the past six months,” says Madar. “The full data were not passed on to us, but the company hints that the situation remains quite similar to that reflected from the first measurements.”

“Sometimes the models turn out to be inaccurate”

Data on emissions from Israeli industry to air, land and water are collected at the Pollutant Release and Transfer Register (PRTR) in the Ministry of Environmental Protection. When there are existing and available technologies for measuring air emissions and when the emitted material is important (for example, measurements of heavy metals or benzene that are hazardous to health), the emissions are measured in the facility and the results are reported to the PRTR (sometimes data on one pollutant include both measurements and modeling).

In other cases, when it is expensive or very complicated to measure pollutant emissions into the air, and / or when the emitted material is of less importance; Companies are not required to directly measure the extent of the emissions themselves, but are required to use criteria set by the Ministry of Environmental Protection to assess emissions. This is usually on the basis of accepted international models of pollutant emissions from known industrial or agricultural processes.

Regarding landfills, the extent of emissions is calculated based on parameters such as the amount of landfilled waste, composition, climatic effects, and treatment methodologies for landfilled waste (e.g., whether landfill gas collected and burned from waste is collected and burned). “The emission assessment criteria are based on the calculation of an accepted international model that the Ministry of Environmental Protection submits to landfills – this make it possible for the state to collect the information according to estimates, without performing actual complicated measurements at each facility separately,” says Madar. “It is important to emphasize that this is not an improper procedure -, and that this is also what is performed in other developed countries.”

“Because landfills are big, evolving and complex facilities; because until a few years ago there were no practical technologies for maybe because landfills emissions are of lesser concern in the EU due to the low fraction of landfilled waste there; and maybe because up until lately greenhouse gas emissions were of less importance compared to acute air pollutants- globally, landfills air emissions are estimated based on models and are not measured.”

Naturally, estimates of air emissions based on models, often cannot be completely accurate. The surest way to understand the extent of pollutant emissions into the atmosphere is to measure them directly. Today, in contrast to the past, there are already methods for measuring methane emissions from landfills with high accuracy. The preliminary results found by SP Interface were collected and analyzed using the satellites of the Canadian company GHGSat, which are able to cover a very large area of ​​about 100 square kilometers, reach a high resolution of about 25 meters, and which take into account different climatic, weather and geographical conditions.

“Assuming that our initial satellite measurements are accurate, it means that the models of the Ministry of Environmental Protection do not accurately reflect reality,” says Madar. “These models were developed from experiments in the laboratory and in the field, but the conditions of the experiments are limited in scope and duration, and they cannot reflect all types of landfills, and all complex conditions that develop within different landfills. Sometimes models are inaccurate and should be improved, or should be replaced with new measuring technologies when these are available.”

“The bigger problem will be if these high emissions that we measured in this single landfill also exist in other landfills in Israel. In such a situation, the actual volume of emissions of all greenhouse gases in Israel can be tens of percent greater than the volume of emissions calculated today. We will be happy to find out that we are wrong and that our initial measurements do not represent the situation, but in order to know this, we have to measure more methane emissions from landfills in Israel.”

Methane is more effective in the short term

Methane is emitted from production, transportation and\or use of coal, oil and natural gas; from growing cattle and rice and, as mentioned, of the activity of waste landfills. In landfills, methane is emitted when the microscopic creatures that live in it decompose the organic matter in the waste anaerobically (without oxygen). “A ton of methane heats up the atmosphere much more than a ton of carbon dioxide, although it is less stable and most of it decomposes in the atmosphere within 20 years.” Says Madar.

According to him, until recently, many ignored the effects of methane. “Most scientists used to look at atmospheric warming on a 100-year scale – in such a period of time, each ton of methane warms the Earth 35 times more than carbon dioxide.” However, in a shorter period of 20 years, methane warms the atmosphere 85 times more than carbon dioxide.”

According to Madar, therefore, when it comes to solutions to reduce the climate crisis in the short term, every small step taken to reduce methane emissions will be of great benefit. For example, if we want to reduce greenhouse gas emissions by 50% by 2030 to limit global warming to 1.50c degrees above the average temperature before the Industrial Revolution, we must reduce methane emissions on a large scale. “Any avoided ton of methane will have a much greater impact in the near future than preventing the emission of a ton of carbon dioxide,” he says.

To meet climate change mitigation goals, you have to measure

According to the report that the United Nations Intergovernmental Panel on Climate Change (IPCC) published last August, a third of global warming is due to methane emissions – therefore, reducing carbon dioxide emissions alone will not be enough to mitigate the effects of the climate crisis. In Israel, according to data from the Ministry of Environmental Protection, about 77 percent of methane emissions come from direct landfilling of organic waste without prior treatment (and this may worsen if the initial measurements mentioned here are found to represent reality).

Following the publication of the latest IPCC report and ahead of the Glasgow Climate Conference in autumn 2021, Israel has joined a US-European initiative to mitigate and reduce the effects of the climate crisis, which includes a goal to reduce 30 percent of methane emissions by 2030. “When we reach the target year, we may find that we emit 3 or 5 times more methane than we thought we emit today” he concludes. This is why methane emissions from a large number of landfills in Israel should be measured over time, and not just evaluated.”

“Understanding the scope of the problem will make it possible to direct sufficient resources to address it. Indeed, the Ministry of Environmental Protection’s 2020 waste treatment strategic plan includes a massive reduction in the amount of waste landfilled, but it will take at least a decade to achieve, while there are techniques that can be applied today in landfills to reduce methane emissions from waste that has already been landfilled.”

The Ministry of Environmental Protection responded:

A number of articles have recently been published claiming that the amounts of methane emissions from landfills, according to a calculation based on remote sensing measurements, are higher than a calculation according to the USEPA’s LandGEM model. In general, according to the MPSL methodology, measurement is more accurate than using a model based on emission factors, and should therefore be preferred. However, currently the most available and advanced tool for calculating landfill emissions is the LandGEM model.

The Ministry of Environmental Protection is not aware of any regulatory requirement abroad for landfills to report their emissions using remote sensing measurements. If such a methodology is published, the ministry will work to examine it and adopt it. We emphasize that greenhouse gas emissions from landfills are one of the high emission factors and should therefore be reduced. Implementing the Ministry of Environmental Protection’s waste strategy is the right way to reduce landfill waste as well as the greenhouse gas emissions that result from it.

This ZAVIT Article by Racheli February 14, 2022