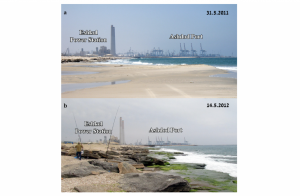 Zavit. The Israeli coastline has been changing for centuries, and the prehistoric evidence can be seen in submerged settlements, ancient artifacts, and sea walls buried just offshore.

The global mean sea level has been rising more than 7 cm in the last 25 years – forcing coastal settlements to build defenses and retreat to higher ground – and predictions of a further rising rate along the Israeli coast this century has led to the construction of coastal defenses, such as breakwaters. However, engineered structures rarely solve all problems and regularly create new issues. As the sea level rises and human interference continues, the Israeli coast will experience more intense flooding, disappearing beaches, and intensifying coastal erosion.

One place that is already experiencing substantial damage is one of Israel’s most well-known ancient sites: Caesarea. Named by Travel & Leisure as 2020’s best tourist spot in the Middle East, Caesarea, as described by Tourist Israel, is “a magnificent site, a national park where amazing ancient harbor ruins, beautiful beaches, and impressive modern residences sit side by side.”

Scientists in Israel, like the University of Haifa’s Beverly Goodman-Tchernov, have endeavored to uncover the country’s past through underwater archaeology techniques and excavating sites.

Dr. Goodman-Tchernov’s research focuses on coastlines and how they have changed, along with reconstructing excavated sites that show evidence of ancient tsunamis. Over the years, she’s witnessed intensifying winter storms destroying what she’s previously documented, which means racing against the clock to document historical sites before they are destroyed by the relentless tides.

Dr. Goodman-Tchernov equates her understanding of coastlines to the old saying: “you never step in the same river twice.” This is because the beaches “are in constant flux,” she says, but overall, “we’re losing sand and losing coast.”

As coastal cities prepare against the rising tide, defenses are built that remedy erosion from constant wave action, but only for a short while. Unfortunately, these structures, which were designed to preserve the coast, inadvertently trap sand around them and thereby exacerbate the rate at which other beaches are disappearing.

Where is the sand going?

Along with the disappearance of timeless artifacts, beaches are vanishing before our very eyes, as sand is impeded from its northward migration from the Nile delta.

Artificial structures along Israel’s coast trap sand that would otherwise travel northward along the Mediterranean Sea, but the development of coastal cities has resulted in sand piling on the south of coastal construction sites.

In 2015, artificial breakwaters were approved in the coastal cities of Netanya, Herzliya, and Ashkelon in an effort to mitigate the impact of winter storms on their coastal sandstone cliffs, and 2019 marked the year a submerged geotube – a fabric tube full of sand to protect shoreline erosion – was installed off the north coast of Tel Aviv’s last non-protected beach. While these developments aim to help, they are met by local surfers and environmentalists with skepticism and contention as they counterintuitively encourage the loss of sand along other parts of the coast and can create dangerous swimming conditions for unsuspecting beach-goers.

Israel has had a plan in action since 2015 to create a series of coastal parks where sand will be channeled to beaches and protected from the relentless waves by building breakwaters with additional reinforcements. This is funded by the Prime Minister’s Office following research on the threat of coastal erosion for antiquity sites like Caesarea, Tel Ashkelon, and Apollonia.

Erosion threatens coastal communities worldwide, but human interference, however well-meaning, appears to exacerbate sand loss and coastal erosion in adjacent unprotected sites. Relentless beating from ocean waves is a difficult opponent, but some communities have found small successes in slowing the rising problem.

The Monterey Bay National Marine Sanctuary along the central California coast in the United States boasts a sweeping coastline and has been home to a destructive beach-front sand mining operation where the coast has eroded by an estimated four feet each year. Since mining began in 1906, sand has been removed from these shores at an alarming rate, and years of protesting and grass-roots movements have ordered all sand mining in the area to shut down by the end of 2020. This small win will drastically slow the rate at which nearby beaches have been eroding.

On the opposite coast of the United States, Florida’s Miami Beach is fighting a losing battle to keep its billion-dollar infrastructure above water by allocating $16 million to purchase 16,000 tons of sand to delay the inevitable rising tide. Federally funded “beach re-nourishment” projects at this scale are a routine event and will continue to occur as coastal erosion continues to threaten the citizens and tourists that visit Miami Beach.

The issue of thinning beaches and coastal erosion leads to an exposed coastline that is vulnerable to natural disasters that are increasing with intensity and severity due to climate change. Concerns over rising tides and erosion for coastal cities must be considered for the success of future communities.

The coastal city of Marina located near the center of Monterey Bay is doing just that by implementing a comprehensive strategy to level with the rising seas by minimizing nearshore development. By managing a controlled retreat from the encroaching tide rather than build expensive ocean-front homes, hotels, and restaurants and coastal barriers, this quaint, nature-centered city is growing and adapting to a future where a higher sea level is certain.

What does this mean for the future?

A future with a relentlessly rising ocean threatens the stability and safety of coastal communities. According to a report by the Intergovernmental Panel on Climate Change (IPCC), the global mean sea level (GMSL) will rise between 0.43 m and 0.84 m until 2100.

Israel’s government is constructing artificial structures to protect the coast, but these measures impede the migration of sand northwards. The coming years will be for trial and error with necessary adaptation to infrastructure to accommodate the dynamic ocean forces, not least to ensure a future for ancient marvels like Caesarea.