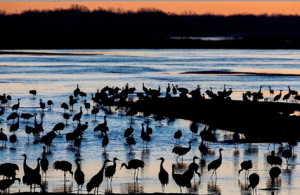 The first wave of migratory birds was observed in the last few days in the Hula Lake north of the Kinneret where they stop on their way southward.

Among other species, one can see pelicans, snake-eagles, ducks, herons, and many song birds. In the lake it is recommended that anyone interested in watching the birds arrive in the early morning or afternoon.

Inbar Rubin, training director of the Hula Lake basin, told NRG news that many visitors find it difficult to believe that autumn approaches while it’s still the peak of the hot summer: “It is difficult for people to understand that autumn is approaching and they don’t believe it, but we explain to them that the birds know better than us when the fall is coming. And if two weeks ago it got dark at 8:30, and now it’s already dark before eight, we do not pay attention to it today because the lighting immediately goes on everywhere, but the birds remind us of the nature of the world that is being forgotten at a basic level. “Today a large flock of 500 storks has arrived, and in recent days we have been seeing the wandering swallows, starting with a dwarf kingfisher, storks, gray herons, species of shore birds, and songbirds in unimaginable quantities.”