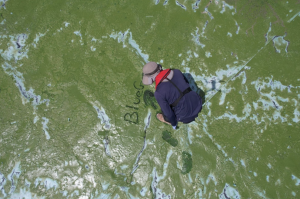 In the global fight against climate change, actively removing carbon dioxide from the atmosphere must be accelerated if we are to avoid devastating, irreversible damage to our climate. BlueGreen Water Technologies (BlueGreen) is among those leading the way.

Cyanobacteria, commonly called blue-green algae, play an important role in removing atmospheric CO2 through their natural process of biomineralization. “They absorb carbon dioxide at a phenomenal rate. By mimicking their biomineralization process at scale, we have found a way to remove large volumes of CO2,” said Harel.

When cyanobacteria are killed, they sink to the bottom of the water body along with the carbon they have sequestered. It is estimated that one acre of algae can remove more than two tons of CO2 a day.

“Water is the world’s biggest natural carbon sink and the natural regulator of carbon in the atmosphere. By capturing and sinking huge volumes of algal bloom biomass, we now have a real fighting chance for humanity against global warming,” said Harel.

Cyanobacteria grow rapidly in warm, nutrient-rich water bodies and float on the surface, often appearing as blankets of scum. Climate change is worsening outbreaks, creating conditions where toxic algae thrive and multiply even more rapidly, releasing toxins that can sicken people and kill wildlife and pets who come into contact with infected water.

“There is no single solution to the urgent climate crisis we are grappling with,” said Harel. “We must use all available tools and tactics. We need to pursue efforts to reduce our dependence on fossil fuels and accelerate the transition to clean energy while  actively pursuing efforts to remove carbon from the atmosphere.”

BlueGreen has successfully treated thousands of algae-choked water bodies on multiple continents, restoring the health and biodiversity of the aquatic environment. From Chippewa Lake in Ohio and Lake Minneola in Florida, to Roodeplaat Dam in South Africa and Nanhu Lake in China, BlueGreen’s water science team and its unique, EPA certified floating algaecide are healing water bodies and making water safe again.

BlueGreen Water Technologies is leading the charge in helping preserve and promote life on Earth. We are restoring, safeguarding, and optimizing the health, safety, accessibility, and biodiversity of waterbodies worldwide – including their wildlife, aquatic life, ecosystems, and economies – by pioneering and applying proven scientific ingenuity and deep tech solutions. BlueGreen is the first and only company in the world to develop, obtain regulatory approval for, and commercialize a technology suite that reverses the effects of climate change in water bodies and drastically reduces greenhouse gas levels. The multidisciplinary team of BlueGreen experts is exposing the secrets of lakes and oceans – detecting, analyzing, preventing and remediating some of the most complex and dynamic problems that plague the world’s water systems.