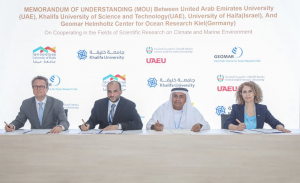 At the 2022 United Nations Climate Change Conference (COP27), University of Haifa signed a first-of-its-kind trilateral collaboration agreement with Emirati and German academic institutes to investigate the consequences of climate change and pollution in the Eastern Mediterranean Sea and the Arabian Gulf.

Signed on Nov. 14 at the high-profile global summit in Sharm el-Sheikh, University of Haifa’s Memorandum of Understanding with United Arab Emirates University and the Germany-based GEOMAR Helmholtz Centre for Ocean Research Kiel is the first step towards a five-year research initiative in which the three institutions will ultimately develop mitigation strategies for the deterioration of marine ecosystems in the region. Participating researchers will utilize advanced ocean-observing technologies such as underwater vehicles, novel cameras, and chemical sensors as well as proteomics, metagenomics, and marine ecosystem models to integrate the data and predict future ocean responses to climate change and pollution. Through multidisciplinary investigations, they will gain insight into past and current processes in the water column and sea floor, and then develop models to determine what the future will look like for the Mediterranean and Arabian Gulf.

The trilateral collaboration marks an expansion of the existing partnership between University of Haifa and GEOMAR. Launched earlier this year, the EMS FORE Helmholtz International Laboratory in the Eastern Mediterranean Sea is a five-year joint program in which the Israeli and German institutions are confronting the climate change crisis by designing an early-warning model system for what climate change in the Mediterranean tells us about future conditions in oceans worldwide. United Arab Emirates University’s entrance into the project, as well as the initiative’s addition of the Arabian Gulf as part of its research, is poised to further enhance understanding of the region’s marine systems and to cultivate greater ties between the participating countries.

In the area of sustainability, University of Haifa and its Leon H. Charney School of Marine Sciences harness modern and innovative technological capabilities for the purpose of amplifying a university-wide academic vision of making contributions towards achieving the U.N. Sustainable Development Goals, which emphasize tackling climate change and working to preserve our oceans. For this purpose, the University’s unique laboratory is the Mediterranean Sea, an optimal research setting due to its semi-closed base and its status as one of the most responsive seas to climate change.

“Our new trilateral collaboration represents a crucial step in the framework of the national and regional leadership of University of Haifa on environmental and marine sustainability,” said University of Haifa President Prof. Ron Robin. “It will not only expand the existing partnership between GEOMAR and University of Haifa, but more broadly strengthen regional and international cooperation. The project will contribute significantly to the understanding of marine systems and will build bridges between these three nations. We feel that we have made history, as well as progress toward a more sustainable future.”

Today, global oceans are increasingly facing a wide range of pressures related to climate change and pollution. The Eastern Mediterranean Sea and Arabian Gulf are marine environments that are severely impacted by ocean warming, de-oxygenation, dust deposition, expansion of sea-water desalination plants, exploitation of deep-sea energy resources, intensive shipping, invasive species, mariculture, expanding tourism, and geopolitical turmoil. To date, there has been an absence of essential understanding of the consequences of these pressures on the ecosystems of the Eastern Mediterranean Sea and Arabian Gulf. Accordingly, the trilateral collaboration operates from the understanding that these ecosystems need to be protected and managed in a sustainable way that will maintain and enhance biodiversity and ecosystem services, while ensuring economic viability and growth for local populations.

“The sea influences the Earth’s climate more than any other factor, and the marine environment is most affected by climate change,” said Prof. Ilana Berman-Frank, head of the Leon H. Charney School of Marine Sciences. “Therefore, the future of the Earth lies in the sea—in understanding marine systems and the changes taking place in our oceans. As scientists, we are making strides in this journey by building bridges and cross-border collaborations with our colleagues from across the region and the world.”

In another development at COP27, University of Haifa scholars addressed the conference’s first-ever Israeli pavilion, delivering a lecture on assessing climate vulnerability in multicultural urban contexts. The presentation by Dr. Maya Negev, head of the Health Systems Policy and Administration Program at the University’s School of Public Health, and Prof. Shlomit Paz, head of the school’s Climate and Environmental Sustainability Center, focused on climate-related social vulnerabilities and the risk of extreme heat in northern Israel.