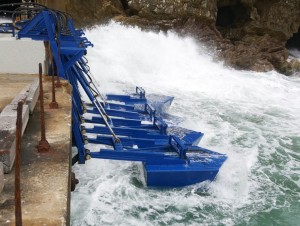 The purpose of the collaboration is for the parties to jointly investigate the development of commercial wave energy power projects in the Australian National Electricity Market (NEM).Eco Wave Power will recognize MEA as a supporting partner, lead the investigation into the application of wave energy in Australia and identify opportunities for the application of the Eco Wave Power Background IP.

Jason Stein, CEO of Meridian Energy Australia said: “Meridian proudly generates only from 100% renewable sources in Australia. Our current generation assets are wind and hydro, so by entering this collaboration we are excited to investigate the potential of wave energy in Australia. We believe that renewable energy is the only way forward and are always looking at ways to diversify and grow our renewable energy portfolio in Australia.”

“It is our honor to work with Meridian Energy Australia” said Inna Braverman, Founder and CEO of Eco Wave Power. “Meridian is demonstrating significant leadership by only generating electricity from renewable energy sources. We believe that this collaboration with Meridian, a global leader in renewable energy, is another significant step in the commercialization of wave energy”

Meridian Energy Australia Pty Ltd (MEA) is a renewable energy and sustainability leader in Australia. The company generates power through two wind farms, three hydro power stations and supports other projects via offtake agreements. Powershop Australia is MEA’s retail business that sells electricity and gas to customers in Australia. It offsets all carbon emissions associated with its customer’s energy usage. Powershop Australia has been recognized as Australia’s greenest power company by Finder in 2020. MEA is a wholly owned subsidiary of Meridian Energy Limited (MEL) which is a renewable energy leader listed on the Australian and New Zealand stock exchanges. MEL operates seven hydroelectric power stations and one wind farm in the South Island of New Zealand, four wind farms in the North Island and retails power through both Meridian Energy and Powershop brands to over 300,000 customers.

EWP is recognized as a “Pioneering Technology” by the Israel’s Ministry of Energy and was labelled as an “Efficient Solution” by the Solar Impulse Foundation. Furthermore, EWP’s project in Gibraltar has received funding from the European Union Regional Development Fund and from the European Commission’s HORIZON2020 framework program. The company was also recently recognized by the United Nations in receiving the “Climate Action Award”, which was granted to the company during COP25 in Madrid, Spain.