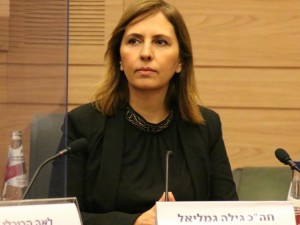 Gamliel says plans to increase the flow of oil through Eilat could end in an even greater environmental disaster than the tar pollution that has contaminated 160 Km of Israeli beaches over the past few weeks.

Environmental Protection Minister Gila Gamliel says a deal to transport oil from the Persian Gulf to Europe, using Israel as a land bridge, could lead to irreversible damage. In October 2020, the Europe-Asia Pipeline Company (formerly the Eilat Ashkelon Pipeline Co.) and MED-RED (a venture jointly owned by an Israeli company and an energy giant in the UAE) signed a memorandum of understanding that would bring oil to Europe and the Far East through Israel. The plan would result in hundreds of thousands of tons of crude oil being transported via Israel’s territorial waters.

Environmental Protection Minister Gila Gamliel: “An urgent discussion must be held with all relevant government bodies regarding the plan to increase the volume of crude oil transportation activity on the EAPC pipelines. What we saw this week on  the beaches, as a result of the severe tar incident, is tiny compared to the amounts of oil in question in the case of the EAPC. An emphasis must be placed on the serious potential consequences for the environment, which could change the area in the event of a disaster, and could cause irreversible damage.

“There is no need to say too much about the serious environmental consequences that may occur in the waters of the Mediterranean Sea and the Red Sea… Increasing the activity of transporting fossil fuels in a place as sensitive as the Gulf of Eilat, given its expansion and dependence on tourism, appears to be a step in the wrong direction.

“From the political-global perspective, this is clearly a non-environmental initiative to increase the volumes of crude oil transportation, instead of encouraging investments in renewable energy and a low-carbon economy. In addition, the risks of an oil spill in the Gulf of Eilat will increase, and accordingly the risk in Ashkelon will also increase, with an emphasis on the sensitivity of the Red Sea ecosystem.

“Reducing Israel’s use of fossil fuels, an effort that the Ministry of Environmental Protection is leading, is a strategic national goal, which is necessary to reduce air pollution and the resulting morbidity and mortality. Israel has pledged to advance beyond a low-carbon economy, as part of the international process led by the OECD and the UN, to combat the climate crisis.”