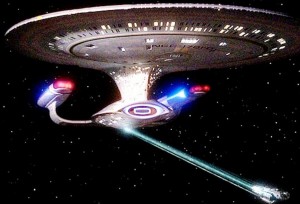 In nature, waves such as those in the ocean begin as local oscillations in the water that spread out, ripple fashion, from their point of origin. But fans of the television series Star Trek will recall a different sort of wave pattern: the tractor beam. Tractor beam technology, if it were to exist, would be based on waves that go in the opposite direction, converging from out in space onto the point of origin. In the show, the Starship Enterprise would send out a tractor beam, like a cowboy’s lasso, to latch onto an object floating in space and pull it back toward the ship.

Prof. Gregory Falkovich of the Physics of Complex Systems Department, working together with the research group of Prof. Michael Shats of the Australian National University, Canberra, recently showed that the idea may not be all science fiction.
In fact, the basic concept is rooted in the research of a 19th century English physicist and mathematician, George Stokes, who examined the physics of waves in great detail. To do so, he placed small spheres in liquid and observed their movement in the fluid ripples. At the time, the prevailing theory held that if a wave was very small, a tiny sphere riding it would move within a closed circle. Stokes discovered that the sphere’s path would not be quite a closed circle. Instead, it would trace an inward-flowing spiral. This idea, which became known as “Stokes drift,” was assumed to be mostly theoretical. One might be able to create the conditions in a lab, but it would be hard, in nature, to find waves small enough to exhibit Stokes drift.
Falkovich’s collaborators, aided by observation technologies of the 21st century, returned to Stokes’ experiments to observe the particles that move in very small waves of light. They discovered, to their surprise, that a three-dimensional representation of the particles’ path is something like that of a drunken man making his way home. But, in their collaborative work, the researchers showed that not only is this movement not random, it is predictable and can even be planned out ahead of time.

Using this insight, the scientists demonstrated the principle using two controlled fluid vortices. Between them a wave flowed “backward” to the point at which the oscillations that created it originated. Some of the scientists in the group are already envisioning the creation of “tractor beams” in water that could, for example, latch onto pirate ships in the Indian Ocean and pull them in. More modest ideas (though still in the future) include using these waves to clean up pollution in the ocean.