Technion : historical visit of Pluton by New Horizons, does Pluton have several moons? 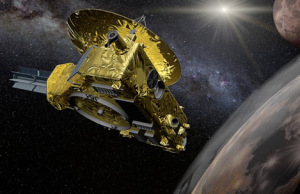 This afternoon, the spacecraft New Horizons will pass over Pluto and will send valuable information to the planet Earth. Members of the research team of Prof. Hagai Perets from the Technion, who are studying Pluto and its moons, believe that this information will greatly contribute to our knowledge about that distant region of the solar system. The spacecraft, which contains scientific equipment and the ashes of the man who discovered Pluto, will continue to head toward Pluto’s moon, and from there to the edge of the solar system.

Within a few hours – just before 15:00, to be more precise – the New Horizons spacecraft will fly by the closest point to the dwarf planet Pluto. Shortly thereafter, it will pass over Charon – Pluto’s main moon – and then it will proceed to the edge of the solar system.

Today’s anticipated historic “visit” will occur exactly 50 years after the first pictures from the surface of Mars reached the Earth. On July 14, 1965, humanity discovered for the first time what the surface of a planet that is not Earth looks like. Since then, all the other planets, except Pluto, have been studied.

Therefore – in order to explore Pluto – New Horizons was launched around nine years ago. The spacecraft, weighing about 500 kilograms, soared into space at a record speed of nearly 60,000 km/h. To save energy, it was then “put to sleep” for a few years and only last December did it “wake up” in order to be able to transmit the information from the vicinity of Pluto. These transmissions began a few months ago, and provided Earth with considerable information and wonderful pictures.

Pluto, discovered in 1930, was considered one of the major planets in the solar system. Since then, all the other planets have been “visited” by spacecraft, which photographed them, and therefore today’s closure is a historic moment. Many people around the world will hold their breath today – even those born long after the “visit” to Mars on July 14, 1965. Two of them are Prof. Hagi Perets and doctoral student Erez Michaeli, from the Technion Faculty of Physics, who are studying the “potential moons” that may be discovered around Pluto.

“Pluto was discovered in 1930,” Michaeli explains, “and only in 1978 was its main moon, Charon, discovered. In the past decade, thanks to the Hubble Space Telescope, four other moons orbiting Pluto on the same plane have been discovered. This gave rise to the question: Does Pluto have more moons?”

In the joint article, Michaeli and Prof. Perets predict the possible locations of other potential moons. “We do not presume to say whether there are such moons, but only ‘map’ the areas where they might be located,” explains Michaeli. “Our mapping is based on the information provided and a set of equations, and we predict that if such moons are found, they will be within the area that we ‘permit’.”

“As an astrophysicist, I really want new things to be discovered, so I would be very happy if moons are found in those places as well. Of course, it would mean that we failed to take something into consideration, but to some extent that would be even more interesting. After all, that’s the one of the beauties of science – surprises tell us more than the success of our predictions.” 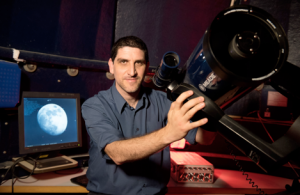 “The discovery of other moons may help us better understand how Pluto was formed,” says Michaeli. “The currently accepted theory in the astrophysics community is that Pluto is the result of an accidental collision of two celestial objects, and some of the debris became its moons, but simulations show that the impact speed was abnormally slow.”

“The collision of a celestial body with its moon occurs at a relatively slow speed,” says Prof. Perets, “and now we’re working on a new model in which Pluto was hit by one of its remote moons. Such a collision could explain what we see today. According to this model, the current moons were formed by a collision between Pluto and one of its ancient moons.”

Dr. Uri Malamud, one of Prof. Perets’s post-doctoral students, is focusing in his research on the development of the bodies in solar system and their internal structure. “Since we have no direct data from inside these planetary bodies, we have to infer the internal structure from various observations and the measurement of density, gravitational field, magnetic field, surface composition and various geological formations that may be an indication of the processes taking place inside. In the case of Pluto and Charon, the density was known previously, which gives a pretty good initial indication regarding the possible internal composition, but now we can improve the existing measurements and obtain detailed information about the surface composition and geological formations. In our study, we rely on assumptions pertaining to the conditions that prevailed when these bodies were formed, and run advanced computer simulations that simulate Pluto’s evolution during 4.5 billion years.”

“Of course one can ask why anyone should even bother studying a lump rock located at the edge of the solar system,” says Prof. Perets, “but from a scientific perspective, there is tremendous motivation here. Pluto and similar objects give us a unique opportunity to explore the first building blocks of the solar system, some of which have been preserved almost unchanged. Pluto gives us a look at the birth pangs of the solar system and the origin of the planet Earth, and now we are seeing it live.”

In an article published together with Prof. Dina Prialnik from Tel Aviv University in the journal Icarus, Dr. Malamud assumes that Charon and other bodies in the Kuiper Belt were “born” from a homogeneous composition of rock and ice, and later developed as a result of warming that led to the flow of water and gas through a porous medium characteristic of small bodies in the solar system. “These dwarf planets have fairly regular structures – an ice shell covering a rocky core – but their level of porosity varies. In our article, we showed that this difference stems from their different masses.” In a follow-on study conducted by Dr. Malamud and Prof. Perets, they are trying to expand their previous study, so that it will be possible to perform simulations of larger bodies like Pluto, partly in light of the new information obtained from New Horizons.

Pluto and the New Horizons mission

New Horizons was launched from Earth on January 19, 2006 – at that time Pluto was still considered one of the nine planets of the solar system – and since then it has covered nearly 5 billion kilometers. During its journey, the spacecraft moved so far from the sun that it cannot generate electricity from sunlight. Therefore, a small plutonium-based nuclear reactor was installed onboard.

New Horizons was designed, built and launched in order to “understand the worlds at the edge of the solar system by making the first reconnaissance of Pluto and the Kuiper Belt, a relic of the formation of the solar system.” In addition to scientific equipment, the spacecraft carries several objects, including a coin of the State of Florida; an urn containing the ashes of Clyde Tombaugh, who discovered Pluto in 1930; a Pluto postage stamp from 1991; and, of course, an American flag.

Pluto was considered one of the nine planets in the solar system until 2006 – the year when it was deposed by the International Astronomical Union (IAU) and defined as “only” a dwarf planet. Several reasons were given for the decision, which was made despite protests by many astronomers: Pluto’s size (it is smaller than many bodies in the solar system that were discovered in recent years and are defined as planets); the unusual fact that Pluto and its principal moon, Charon, are not very different from each other in size; Pluto, unlike “real” planets, doesn’t remove particles and larger objects from its environment; and, finally – Pluto’s orbit is unusual compared to that of our known planets, all of which move around the sun on an ecliptic plane. The plane of Pluto’s movement around the sun is at a deviation of around 17 degrees from the ecliptic plane, and it self-rotates at a 119 degree angle from that plane, which means that it self-rotates in one direction and orbits around the sun in the opposite direction.

Pluto was discovered by Tombaugh in 1930, and received its name in a public competition – the winning name was proposed by an 11-year-old girl. Because of its distance from the sun – around 6 billion kilometers on average – its surface has a very low temperature: around -220⁰C. Because of its very long orbit, a “Pluto year” is equal to 248 of our years. Pluto’s orbit is very elliptical, unlike most of the planets, and this causes strange phenomena: when it’s far from the sun it’s completely frozen and has no atmosphere, and when it draws near it heats up and substances evaporate from its surface, thereby creating the atmosphere, and so on and so forth.