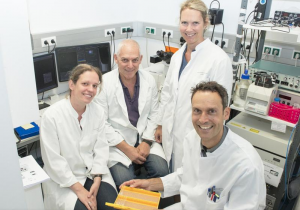 Scientists at the University of Bonn and the Hebrew University of Jerusalem (Israel) have decoded a central signal cascade associated with epileptic seizures. If the researchers blocked a central switch in epileptic mice, the frequency and severity of the seizures decreased. Using a novel technology, it was possible to observe the processes prior to the occurrence of epileptic seizures in living animals. The results are now being published in the journal “Nature Communications”.

Approximately one out of every 20 people in the course of his or her life suffers an epileptic attack, during which the nerve cells get out of their usual rhythm and fire in a very rapid frequency. This results in seizures. Such synchronous discharges in the brain occur most frequently in the temporal lobe. Often, a seizure disorder develops after a delay following transient brain damage – for example due to injury or inflammation. So-called ion channels are involved in the transfer of signals in the brain; these channels act like a doorman to regulate the entry of calcium ions in the nerve cells.

“It has also been known for a long time that following transient severe brain injury and prior to an initial spontaneous epileptic seizure, the concentration of free zinc ions increases in the hippocampus. But science has been puzzled about the significance of this phenomenon,” says Prof. Dr. Albert J. Becker from the Institute of Neuropathology of the University of Bonn. The hippocampus, located in the temporal lobe, is a central switching station in the brain.

The team of Prof. Becker, together with scientists from the departments of Experimental Epileptology and Neuroradiology of the University of Bonn Hospital as well as from the Hebrew University in Jerusalem (Israel), have now decoded a signaling pathway which is involved in the onset of a seizure disorder. If the number of zinc ions increases following transient severe brain damage, these ions dock in greater numbers onto a switch, the so-called metal-regulatory transcription factor 1 (MTF1). This leads to a large increase in the amount of a special calcium ion channel in the nerve cells and overall, this significantly boosts the risk of epileptic seizures.

The scientists demonstrated the fact that the transcription factor MTF1 plays a central role in this connection using an experiment on mice suffering from epilepsy. “Using a genetic method, we inhibited MTF1 in the epileptic mice and as a result, the seizures in the animals were much rarer and weaker,” says lead author Dr. Karen M.J. van Loo who is conducting research in the team working with Prof. Becker.

The scientists used a novel method during their examinations. With the help of viruses, the researchers introduced fluorescing molecules in the brains of mice and these molecules always glowed when the production of the special calcium ion channel was activated. The beams of light emanating from the fluorescence molecules can be measured through the top of the mice’s skulls. This makes it possible to examine the processes which take place during the development of epilepsy in a living animal.

“If the fluorescence molecules glow, this indicates that the mouse is developing chronic epileptic seizures,” says the molecular biologist Prof. Dr. Susanne Schoch from the department of Neuropathology at the University of Bonn. The researchers also see a possible potential in this new technology for novel diagnostic approaches in humans.

Hope for new options for diagnosis and treatment

The scientists hope that new treatment options will open up for epilepsy patients as a result of their discovery. “About one-third of patients with temporal lobe epilepsy do not respond to medications. Our research is therefore increasingly focusing on new therapeutic options that have few side effects,” states Prof. Becker. If the zinc ions or the transcription factor MTF1 were specifically inhibited in the brain, it is possible that the development of a seizure disorder could be prevented. “However, this still needs to be demonstrated in further studies,” says Dr. Karen M.J. van Loo.