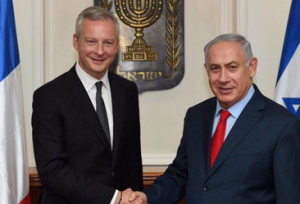 Following is an excerpt from Prime Minister Netanyahu’s remarks to the company leaders: “Thank you, Mr. Minister. I thank you for your friendship and also for your clear statement about opposing the boycotting of Israeli products.

I spoke to Erich Schmidt of Google, who I meet regularly along with others who lead the great technological revolution that is taking the world. And I asked him, what about… Aren’t you concerned with boycotting Israel? And he said, “Boycotting Israel? I have to boycott myself? This is where the cutting-edge technology is taking place. I mean, there are only,” he said, “two centers…” His words, I don’t know what he says in Paris, but this is what he said to me in Israel. He said, “In some areas, Israel is more important than Silicon Valley. And the places where I invest, which is cutting-edge information technology there, we can’t afford to do that. It’s inconceivable.”

This is producing a tremendous change today in Israel. Example – Japan. Japanese companies, for years did not come to Israel. Mr. Abe came a few years ago at my invitation. I went to Japan and he came now. The extent of Japanese investment in Israel grew by 20 times. Twenty times. Not double, not triple, 20 times in three years. And the same thing is happening in Israeli investments, I don’t know if on the same scale.

Let me say about what is happening in Israel which may be of interest to you. I don’t think there are many areas that are not going to be technologized. I think the idea of high-tech and low-tech is being washed away. Not everywhere, but in many, many areas. It’s being washed away faster than people think. I think also that new markets are created. The traditional economic assumption, that if you have demand or supply that produces demand, demand that produces supply, this is all true. But innovation creates entirely new demands. Innovation is creating entirely new industries and revolutionizing old industries.”