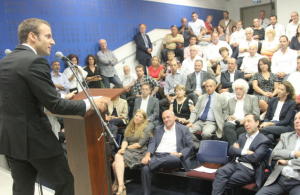 From January 31 to February 4, Business France office in Tel Aviv (Embassy of France) will host in Israel the French cluster Cap Digital, and a small group of French startups supported by the French Ministry of Economy. A series of meetings and visits on the theme of Big Data will be organized. This 4-days program will allow French participants to discover the heart of the Israeli innovation.

This action is part of the new French Tech-Israel HUB. The creation of this platform was announced by Emmanuel Macron during his visit in Israel last September. It aims to increase mutual visibility of French and Israeli innovation ecosystems, making French startups understand that Israel represents significant opportunities in the field of technological innovation. It also aims to enhance the attractiveness of France in Israel with entrepreneurs of the start-up Nation.

The first days of this Big Data visit will be dedicated to the meeting of Israeli professionals in Tel Aviv: there will be numerous personalized meetings organized by Business France between the French participants and Israeli actors, retailers, and potential commercial and technological partners.

An Israel-France Forum on the issue of Big Data will be jointly organized by the Embassy of France in Israel and the Chamber of Commerce Israel-France, on February 2nd at 18:30. The networking event will take place in the Discount bank’s museum and will host speakers such as the Director of Keyrus Israel, Cyril Cohen-Solal and Adi Shavit Shacham-from the startup Apps Flyer. Technological partnership projects between France and Israel will be discussed.

A visit to Haifa will also be organized for the French experts during the Big Data’s mission. First, the delegation will visit Technion’s campus, single tank of innovation and Israeli research. Microsoft, major player in Big Data in Israel, will also open the doors of his laboratory in Haifa, located in the cluster of Matam. The multinational, which recently celebrated its 40 years of existence, is part of the DNA of Israeli innovation. In Matam again, a meeting is scheduled with Israeli startup Medisafe, which is an emblematic representative of the success of Israeli innovation in the Big Data applied on public health. It manages patient compliance with prescribed treatments.

Among the French participants to these meetings, IC Secure, based in Ille-et-Vilaine, develops technologies for secure embedded systems and cyber attacks to protect the complex world of semiconductors. Quinten company is specialized in Data Science and Artificial Intelligence. It develops innovative algorithms that allow enhancement of Big Data. Active Eon is a software company in the fields of information technology, big data and the Internet of Things (IoT). Cap Digital, the leader of this mission is a cluster of the Paris region. It includes just over 1010 members, consisting of SMEs, ETI / GE / EPIC, schools, universities and venture capitalists.

Each year, more than 150 French companies are supported by BusinessFrance, the commercial department of the Embassy of France, in their way through international development on the Israeli market.