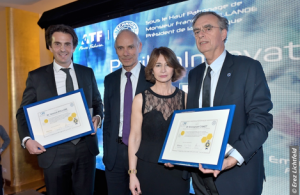 The 13th annual conference of the Technion France, headed by Muriel Touaty, Director General, which took place December 14, 2015 at La Maison de la Chimie in Paris “Applying BIG DATA ‘, given to the economy” , has emerged once again as the meeting must for French and Israeli Technion ecosystems. The event was a remarkable success with a packed auditorium for the scientific symposium about Big Data, more than 450 people participated in the Scientific Symposium and 300 people answered present for the Grand Cocktail Dinatoire in the evening, which included a TechLab space innovation.

On this occasion more than 42 speakers, prominent business leaders, as well as scientific, institutional personalities, alongside members of the delegation led by the Technion Vice President for Research, Professor Wayne Kaplan, animated four roundtables focused on themes related to the application of Big Data: