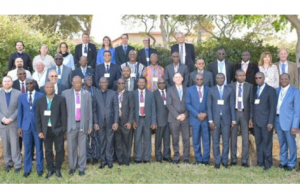 In a sign of growing ties between Israel and Africa, officials from 13 West African countries came to Jerusalem this week to discuss how to grow crops in dry regions. The three-day conference was organized by the Economic Community of West African States, or ECOWAS, and Mashav, Israel’s Agency for International Development Cooperation.
It’s the first-¬ever ECOWAS seminar held outside West Africa, Jerusalem Post reported. The theme was “Enhancing Sustainable Agricultural Productivity in Arid and Semi-Arid Regions.
Delegates to the conference included foreign ministers of Nigeria, Togo, Liberia, Guinea, Cape Verde, Gambia, and Sierra Leone; and senior officials from Benin, Burkina Faso, Ivory Coast, Ghana, Guinea-Bissau, and Senegal, according to Times of Israel. No one attended from Mali and Niger, with whom Israel has no relations. “We were hoping they would follow suit and join but it didn’t happen,” said Gil Haskel, head of MASHAV.
African delegates learned about agricultural technology produced in Israel, especially how to deal with arid climatic conditions. It’s a topic of interest in African agriculture due to a similar climate conditions in their countries, said Israeli agriculture spokesman Jonathan Blum.
Liberia’s almost-20-year civil war left destruction, said Liberian Agriculture Minister Moses Zinnah. He said he was impressed with Israel’s ability to overcome adversity and achieve food self¬-sufficiency.
“Israel has been able to survive in a very harsh environment. There is something unique about it,” Zinnah told The Jerusalem Post while visiting the Volcani Center, an agricultural research center in Beit Dagan, Israel. “Our only hope to revive the economy and create jobs is the agricultural sector. So this visit is very, very timely. The only hope for us in Africa – to move the continent forward – is agriculture.”
Israeli Prime Minister Benjamin Netanyahu has worked on improving ties with Africa. He visited four East African countries in July — Uganda, Rwanda, Kenya and Ethiopia –and met with seven African heads of state. Two months later he held a meeting with more than 15 African leaders on the sidelines of the U.N. General Assembly in New York.
In November Netanyahu said he plans to visit West Africa in a few months to meet another 15 African heads of state, Times of Israel reported.
While Israel wants to boost trade with all sub-Saharan African countries, efforts until recently have been focused on East Africa, which is closer to Israel and English speaking, Haskel said, according to Jerusalem Post.  The natural next step is to move west on the continent, he said.
It wasn’t easy getting ECOWAS members to hold a conference in Israel, Haskel said. The conference was Haskel’s idea. ECOWAS President Marcel Alain De Souza visited Israel earlier this year. “I told him that in Israel we make the impossible possible,” Haskel said.“This conference is an example.”
Conference participants learned about irrigation and land management techniques, dairy technology and agricultural extension at the MASHAV Agricultural Training Center on Kibbutz Shefayim near the central coast.
They met with several Israeli agricultural tech companies and startups, spoke with researchers and saw crops grown in harsh climatic conditions. Areas of interest for African agriculture include animal productivity, post¬-harvest strategies and training opportunities in Israel.
Sierra Leone’s agriculture Minister Monty Jones said he plans to strengthen partnerships with Israel, Jerusalem Post reported. “Israel is one of the leading countries promoting agricultural development in the world,” Jones said.
For example, Israel excels in a process called fertigation — combining drip irrigation and fertilization. “Whatever groups will want to work in Sierra Leone, we will be happy to receive them,” Jones said. “This shouldn’t be a one-¬time effort.” The conference will be useful to Cape Verde, said agriculture Minister Gilberto Silva in a Jerusalem Post report.

“Israel is an inspiring country for me,” Silva said. “We have the same natural conditions.” Cape Verde is looking for a variety of different agricultural technologies and is eager to forpartnerships with Israelis on water management, greenhouse use, services and other areas.” “The cooperation already exists,” Silva said. “We are going to reinforce this cooperation by training courses and working together on different areas of agriculture.”