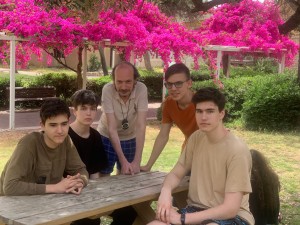 Days ago, Leonid Diachenko was witnessing horrors of war. Now, as he worries about the safety of his family, the 14-year-old is part of a group of ten peers aged 14-18 starting free university studies. Coaches from Israel’s math team stepped in, and one got his company, StarkWare, to bankroll the program. Bar-Ilan U. funding the program with generous contributions from StarkWare, Google, and additional funds raised by the Israel Friends of Bar-Ilan, headed by Gideon Hamburger.  Over the past month, Bar-Ilan has received 50 inquiries from Ukrainian students and researchers seeking to be admitted to the University. Thirteen of them have already been absorbed and more are expected to arrive soon.

Suddenly, when the war began, the youth, members of Ukraine’s world championship math team, found their lives and studies thrown into chaos. Coaches on the Israeli team heard of their rivals’ plight and arranged for them to relocate and study at Bar-Ilan University near Tel Aviv for the foreseeable future.

“One moment all my academic hopes were halted due to the war, and the next, I’m starting university studies at age 16 in Israel,” said Boris Holikov from Dnipro, Ukraine’s fourth largest city. “I grabbed the opportunity almost straight away, as I know I won’t regret it.”

Over the last few weeks the Bar-Ilan International School, led by Executive Director Ofer Dahan, has arranged visas and housing, and prepared an interdisciplinary academic curriculum tailored to the students’ needs. “It’s heartbreaking that these youngsters need to leave home to continue normal life, but we were determined to give them the chance to do so,” said Bar-Ilan University President Prof. Arie Zaban.

“In just a few weeks we’ve pulled together a program that would normally take months of planning. But extreme times call for extreme efforts,” added Bar-Ilan CEO Zohar Yinon. “From now until October the youth will take courses in math, computer science, and physics, and will learn Hebrew, as well. They will receive university credits and some of the students are expected to segue into bachelor’s degree studies in October.”

Some are in their early teens, and away from home for the first time. “My mother took me as far as Poland but then I had to say goodbye,” said Leonid Diachenko, 14, from Kyiv. “It was really hard to say goodbye to my mom because I don’t know when I’ll see her. It could be a long time and I think lots about the safety of my whole family, but I have to live with this.”

He added: “I’m excited about being here in Israel. It’s giving me exactly what I’ve wanted, in spite of the war which is disrupting the dreams of so many people from our country.”

Notable contributors to the project include Google and StarkWare, one of the world’s top companies creating tech to make blockchain mainstream. Dr. Dan Carmon, one of StarkWare’s engineers, is a coach on the Israel youth math team. When he proposed that StarkWare contribute funding needed to launch the humanitarian effort, the company immediately agreed.

“It’s very personal for me as I know the Ukrainian coaches from competitions — and my colleagues identify strongly with the team. Numbers are an international language, and at every contest we see math bringing together kids from everywhere,” said Carmon. “We were crushed by the plight of the Ukrainian team, and this bond made us determined to take action. I feel it’s a privilege to help bring them to safety,” he added.

Prof. Avinatan Hassidim, of Bar-Ilan’s Department of Computer Science and head of the Google research group in Israel, said: “Our thoughts are with the people of Ukraine. Google is working on various levels to assist the people of Ukraine during this crisis. The opportunity created here to help young Ukrainian mathematicians is touching and humane. “

The teens, in Israel for the first time, are living in the Bar-Ilan University dormitories.