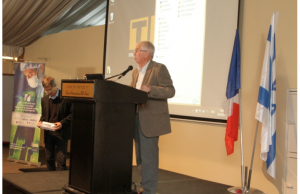 Medical robotics is a interdisciplinary field that combines the know-how of the robotic engineering and the knowledge of the medicine. Laboratories in France as well as in Israel work in several solutions using robots to improve the safety, the preciseness and the efficiency of medical practices. These laboratories sent their representatives in Tel Aviv on 23rd March 2015 at the symposium HCST Medical Robotics. Many innovative aspects have been discussed such as the use of robots for surgery and also rehabilitation using motorized arms. Following this event, French-Israeli collaborations are already under negotiation.

How to operate a patient with the minimum collateral damages, such as cuts through the skin? Which solutions to reduce risks related to brain surgery or spine surgery? How should the surgeons be trained to these new practices? Are these solutions viable especially regarding costs and surgery timing aspects? Covering a lot of aspects, such questions rose during the symposium HCST Medical Robotics.

Yair Barzilay, from the medical center Shaare Zedek, presented a roboticized tool that allows drilling very precisely in the spine. Such surgery, which happens near nerves, lungs, and the spinal cord, can really benefit from robots to accurately operate on well-defined area and therefore should increase the safety of patients. In France, Eric Stindel, researcher and surgeon at the university hospital in Brest, asked the viability of a tool which improves accuracy while operating knees. Indeed, for the project to be implemented in hospitals, devices need to be affordable and easier to use than current practices.

In France and in Israel, the proportion of elders is growing. It implies a significant increase of broken bones caused by falling accidents. Hence, a more efficient rehabilitation needs to be developed. Already, robots come with some answers. As they participated to the symposium HCST Medical Robotics, scientists – from the Ben Gurion University of the Negev in Israel and Pierre and Marie Curie University in France – explained their researches which use robotics to better understand efficiency and mechanisms of the rehabilitation. For example, robotic arms have been designed to guide movements during the rehabilitation.

In total, eight scientists from France travel to Israel to attend the symposium HCST Medical Robotics. They have been able to discuss with their Israeli peers, who were numerous to listen to the talks. On the 24th March, the University of Tel Aviv and the Ben Gurion University of the Negev kindly opened their doors to their French colleagues. As they visited the laboratories, French people had the opportunity to test themselves the devices that still under development. 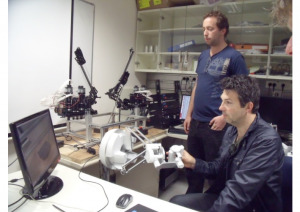