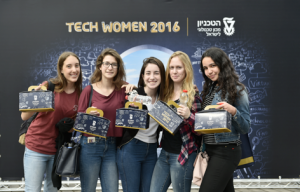 “When I was in high school I really didn’t know what I wanted to be when I grew up, but one day the penny dropped and I realized that I wanted to be an engineer.  That’s because engineers are people who look for solutions to problems: they design and streamline things and help the world advance. This is what paved the way that led me here, to the Technion.”

These statements were made by Naama Koifman, a doctoral student in the Nanotechnology and Nanoscience track at the Technion’s Wolfson Faculty of Chemical Engineering, who hosted the opening plenary session of Tech Women 2016 on Wednesday, March 2, 2016. 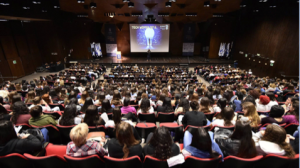 Held courtesy of the Rosalyn August Girls Empowerment (GEM) Initiative, This was the first event of its kind, intended to encourage outstanding female high school students to pursue higher education in science and engineering. The conference was held in honor of International Women’s Day, which will be celebrated next week in Israel and around the world.

The 670 students who participated in the conference are all studying advanced-level mathematics, science and technology for their matriculation exams. They met with female researchers and faculty members, Technion alumnae and female graduate students. The students toured the laboratories and learned about the research topics and subject matter at five faculties: Electrical Engineering, Computer Science, Mechanical Engineering, Aerospace Engineering and Civil & Environmental Engineering. 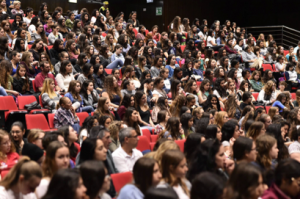 Speaking in advance of the event, Technion President Prof. Peretz Lavie said: “The first class at the Technion, which opened in 1924, was attended by 16 boys and one girl. Today, the percentage of women among undergraduate students at the Technion is 37%, and our goal is to reach 50% in all faculties. This special day was designed to convince female students that they belong here at the Technion and that they can do it. Our future in the State of Israel is based on engineering and scientific knowledge, and we look forward to seeing these students in a few years at the academic school year opening ceremony.”

Addressing the students, Prof. Daniella Raveh, member of the Faculty of Aerospace Engineering, said: “I really love airplanes. They are my occupation and my hobby. I am fortunate in being able to do what I love and I also have a pilot’s license. Aeronautics is a field that’s suitable for men and women alike, and any good engineer who graduates from the faculty is guaranteed employment in the field.”

Assistant Prof. Yael Yaniv from the Faculty of Biomedical Engineering, who has three degrees from the Technion, told the students: “I attended Municipal High School No. 5 in Haifa. I was very happy when they opened a math program, but on the first day I found out that I was the only girl and I wanted to quit. Fortunately for me, my mother didn’t let me give up, and in ninth grade I started studying at the Technion Faculty of Electrical Engineering – because people told me it was the toughest school of all. Today, as a member of the Technion Faculty of Biomedical Engineering, I know that anyone can do whatever he or she wants, and it doesn’t matter if you’re a man or a woman. Here at the Technion you can make any dream come true.”

Sarai Duek, a doctoral student at the Faculty of Computer Science, told the students: “Today, after earning two degrees at the Technion and half-way through my doctorate, I can tell you: the Technion is hard, but here you become better and stronger, you meet amazing people and, of course, you get to study at the best place there is.”