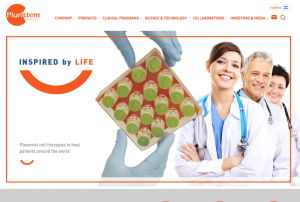 European Investment Bank (EIB) backs Pluristem with €50 million of financing, which will help the company to advance the clinical development of its cell therapies and address a number of severe medical conditions

The deal is the first Israeli-European project guaranteed by the European Fund for Strategic Investments, the financial pillar of the Investment Plan for Europe, a joint initiative of the EIB and the European Commission

The signature was announced in the context of a Memorandum of Understanding, by which the EIB and the National Technological Innovation Authority of Israel have agreed to cooperate in the globally emerging field of bio-convergence

Today, the European Investment Bank and the Israel Innovation Authority signed a cooperation agreement to jointly pursue investment opportunities in the domain of bio-convergence in health. The intersection of biopharma, information technology and engineering is an important building block in supporting global public health goals. The agreement, initiated by kENUP Foundation, aims at deepening the links between Israel and the EU, fostering innovation in the region, closing investment gaps and jointly assuming global leadership in the area of bio-convergence. Ultimately, it is set to benefit Israeli and European citizens and corporations.

In the context of this Memorandum of Understanding, the EIB is supporting Pluristem through its German subsidiary Pluristem GmbH, with a venture debt loan of €50 million. Pluristem is a regenerative medicine company with a focus on novel biological products. The company uses cells derived from placentafor the development of product candidates for the treatment of severe medical conditions such as infections, inflammation, ischemia, muscle injury, haematological disorder or acute radiation syndrome. It has recently extended its activity in response to the coronavirus pandemic and treated several COVID-19 patients with acute respiratory failure under the “compassionate use” programme, a treatment option which allows the use of unauthorised medicine for severely ill patients.

The financing will support Pluristem’s research and development in the EU, notably its regenerative cell therapy platform. It will also allow the company to push its advanced clinical pipeline towards marketing. Pluristem will receive the financing in three tranches, subject to the achievement of pre-agreed clinical regulatory and scaling up milestones. The first tranche will consist of € 20 million. The company is the first Israeli-European business to benefit from a guarantee from the European Fund for Strategic Investments, the financial centre-piece of the Investment Plan for Europe, in which the EIB and the European Commission are working together to mobilise investment in the EU.Pluristem was previously funded by the Israel Innovation Authority.

European Commission Executive Vice-President Valdis Dombrovskis said: “The Investment Plan for Europe has a strong track record of supporting ground-breaking research and development in the health sector. Pluristem is carrying out highly innovative and crucial work in the fight against coronavirus, now boosted by financial backing from the EU.”

“Today’s signatures show that we are successful when we stand together,” said Ambroise Fayolle, EIB Vice-President in charge of innovation. “Israel is home to a thriving scene of innovative startups, which dominate the high-tech industry. Pluristem is an excellent example of Israeli-European cooperation and EIB support for them is particularly timely, as it will allow the company to develop a treatment for the most vulnerable COVID-19 patients. Working together often saves time and resources – in this case it has the potential to save lives.”

Dr Ami Appelbaum, Chairman, Israel Innovation Authority and Chief Scientist at the Ministry of Economy and Industry, explained: “Israel views bio-convergence as its next economic growth engine. This innovative approach serves as an engine to find efficient, diverse and ingenious approaches to health problem solving. It integrates biology with engineering, AI, physics, computation, nanotechnology and material science in order to address unmet needs in numerous industries, including health, agriculture, energy and defence. The collaboration between the European Investment Bank and the Israel Innovation Authority provides a unique opportunity to advance this area providing companies with various financing opportunities from early stage to growth. As the COVID-19 pandemic spreads globally, it is of vital importance to employ cutting edge technological innovation with global outreach to provide the much needed relief the world is looking for.”

EU Ambassador to Israel Emanuele Giaufret said: “A coordinated global response is needed to fight COVID-19, and the EU is launching a worldwide pledging marathon precisely to ensure that the world works together to find safe, effective and affordable treatments, diagnostics and vaccines. Today’s important agreement with the EIB will help to develop promising treatment for coronavirus, and is yet another achievement of the EU and Israel, strengthening our cooperation in research and innovation. We thank Israeli researchers for their efforts, and look forward to continued joint work for the benefit of all.”

Pluristem CEO and President Yaky Yanay stated: “Pluristem would like to thank the EIB for its financial support and its commitment to finding an effective treatment for life-threatening medical conditions, among them complications associated with COVID-19. Our company’s mission of harnessing the power of regenerative medicine to improve the wellbeing of an aging population has become more urgent than ever, as we work tirelessly to develop a treatment for COVID-19 complications while advancing our portfolio of products in advanced stage trials to treat a number of indications that may positively impact on global healthcare systems. We are honoured to become the first Israeli-European company to benefit from a guarantee from the European Fund for Strategic Investments.”

The signature event will be live streamed at 10.00 am CET.

Amiram Applebaum, Chairman of the Israel Innovation Authority and Chief Scientist at the Ministry of Economy and Industry

To watch please go to: https://signing-ceremony.eu.

The European Investment Bank is the long-term lending institution of the European Union owned by its Member States. It makes long-term finance available for sound investments in order to contribute towards EU policy goals. The EIB also supports investments outside the EU.

About the Israel Innovation Authority

The Israel Innovation Authority, responsible for the country’s innovation policy, is an independent and impartial public entity that operates for the benefit of the Israeli innovation ecosystem and Israeli economy as a whole. Its role is to nurture and develop Israeli innovation resources, while creating and strengthening the infrastructure and framework needed to support the entire knowledge industry. The Israel Innovation Authority provides a variety of practical tools and funding platforms aimed at addressing the dynamic and changing needs of the local and international innovation ecosystems.

About the Investment Plan for Europe

The Investment Plan for Europe is one of the EU’s key actions to boost investment in Europe, thereby creating jobs and fostering growth. To this end, smarter use is made of new and existing financial resources. The EIB Group is playing a vital role in this investment plan. With guarantees from the European Fund for Strategic Investments, the EIB and EIF are able to take on a higher share of project risk, encouraging private investors to participate in the projects. To date, the projects and agreements approved under EFSI are expected to mobilise around €478 billion of investments and to benefit over 1 million small and medium-sized companies throughout the EU.

The Memorandum of Understanding between the EIB and the Israel Innovation Authority recognises the shared commitment to deepening the links between Israel and the EU, to foster innovation in the region, to close investment gaps and to jointly assume global leadership in the area of bio-convergence. The Israel Innovation Authority is a reliable partner for the EIB in view of its broad technical and sector expertise and its well-established relationships with relevant industrial and public players. At the invitation of kENUP Foundation, the EIB and the Innovation Authority convened a series of meetings between October 2018 and January 2020 to discuss future common endeavours. In addition, the EIB has identified a number of innovative smaller companies supported by the Innovation Authority with investments in Israel and in Europe, which are promising counterparts for EIB equity-type operations.

This press release contains express or implied forward-looking statements within the Private Securities Litigation Reform Act of 1995 and other U.S. Federal securities laws. For example, Pluristem is using forward-looking statements when it discusses that the proceeds from the EIB financing will help it advance the clinical development of its cell therapies and address a number of severe medical conditions, as well as support its research and development of its regenerative cell therapy platform in the EU,  and allow it to push its advanced clinical pipeline towards marketing, that the cooperation agreement between the EIB and the Israel Innovation Authority is set to benefit Israeli and European citizens and corporations and that the agreement with the EIB will help to develop a promising treatment for coronavirus. While the EIB and Pluristem have executed the loan agreement, there is no guarantee that Pluristem will achieve the milestones necessary to receive any or all of the three tranches. These forward-looking statements and their implications are based on the current expectations of the management of Pluristem only, and are subject to a number of factors and uncertainties that could cause actual results to differ materially from those described in the forward-looking statements. The following factors, among others, could cause actual results to differ materially from those described in the forward-looking statements: changes in technology and market requirements; Pluristem may encounter delays or obstacles in launching and/or successfully completing its clinical trials; Pluristem’s products may not be approved by regulatory agencies, Pluristem’s technology may not be validated as it progresses further and its methods may not be accepted by the scientific community; Pluristem may be unable to retain or attract key employees whose knowledge is essential to the development of its products; unforeseen scientific difficulties may develop with Pluristem’s process; Pluristem’s products may wind up being more expensive than it anticipates; results in the laboratory may not translate to equally good results in real clinical settings; results of preclinical studies may not correlate with the results of human clinical trials; Pluristem’s patents may not be sufficient; Pluristem’s products may harm recipients; changes in legislation may adversely impact Pluristem; inability to timely develop and introduce new technologies, products and applications; loss of market share and pressure on pricing resulting from competition, which could cause the actual results or performance of Pluristem to differ materially from those contemplated in such forward-looking statements. Except as otherwise required by law, Pluristem undertakes no obligation to publicly release any revisions to these forward-looking statements to reflect events or circumstances after the date hereof or to reflect the occurrence of unanticipated events. For a more detailed description of the risks and uncertainties affecting Pluristem, reference is made to Pluristem’s reports filed from time to time with the Securities and Exchange Commission.