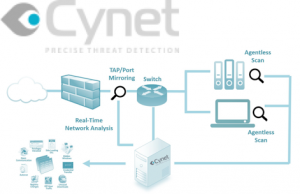 Israeli cyber security company Cynet, which pioneers an all-in-one agentless cybersecurity solution for detection and remediation of advanced and unknown threats, has closed a $7 million investment from US based hedge fund Lazarus.

Based in Rishon Lezion, Cynet was founded in 2015 by Eyal Gruner, Idan Amir, and Boaz Zilber, veterans in Israel’s flourishing cybersecurity industry. Leading the Cynet team is Eyal Gruner, former CEO and a co-founder of BugSec and Versafe, which was acquired by F5 Networks in 2013. Prior to this round, the founders self-funded the company.

Since its launch last year, Cynet has already experienced rapid growth with a global client base that includes dozens of large-scale enterprises in finance, healthcare, government, retail, and industrial sectors among others.

“I was fortunate to get an early start in my career. Now my goal is to build a big company, an Israeli company, which will be around for many years to come,” said Gruner.

Lazarus partner Brian Abrams sadid, “We believe Cynet could be the next cybersecurity giant to come out of Israel. With their comprehensive solution and rapid proof-of-concept deployments, Cynet is going head-to-head with the biggest cybersecurity companies out there and winning.”

The new financing allows Cynet to strengthen its foundation, continuing to develop its groundbreaking threat detection and response technology, while expanding its worldwide presence. The company also has the option to take additional funding from Lazarus if it chooses to do so.

Cynet 360, which was recognized by CSO Outlook as one of the top ten detection and response solutions of 2015, enables organizations to rapidly uncover and remediate high risk threats that have managed to bypass their perimeter security solutions. Cynet’s strength lies in the platform it offers upon which it can provide customers of every size the solutions they need to detect and remediate even the most deeply hidden threats.

Cynet’s decision to raise funding from a US hedge fund, rather than a traditional venture capital firm, underscores its goal of targeting an initial public offering (IPO) rather than an acquisition by a larger firm.