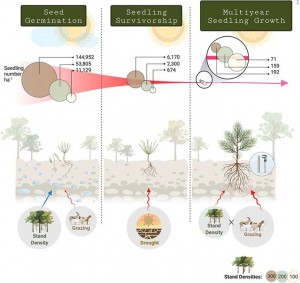 A few years ago, an old lemon tree that towered in the garden of my parents’ house died, but before it did, the tree left us with a parting gift––a new sprouting lemon tree that grew right next to it. Today, that young lemon tree is now mature, producing many healthy, ripe fruits.

In a private garden, an event such as this is often unplanned and perceived as nothing more than a happy accident, but in forests, the ability to spawn subsequent generations of tree saplings remains critical for providing lasting ecosystem and habitat services for humans and wildlife alike.

According to a new Israeli study, however, climate change-induced rainfall decline is presenting serious threats to natural forest regeneration, especially in Israeli forests. For regeneration to be successful, enough sprouts need to germinate and survive to grow into healthy young trees. These processes were examined by a team of researchers from the Weizmann Institute of Science (including Prof. Dan Yakir), the JNF, and the Volcani Institute. Financed by the JNF and published in the scientific journal “Forest Ecology and Management, the study, was conducted between 2015-2020 in the Yatir Forest, Israel’s largest planted forest (an area of 30,000 dunams or 7,413 acres) located in a semi-arid region between the Judean and Negev mountains, in the edge of the distribution range of pine trees (the farthest point in which the species grows).

At first, researchers observed abundant sprout growth in the March and April months, but this regeneration quickly faded.

“In season, we saw a very large and massive germination, so the forest seemed to be growing normally and well,” says Ella Pozner, graduate student in the Department of Plant and Environmental Sciences at the Weizmann Institute of Science and one of the study’s editors.

However, the trend soon reversed, and only a fraction of the sprouts-––at most 10 percent––survived the summer into September. In the 6 years of the study, only a few sprouts managed to become young trees; a maximum of 20 trees on average per dunam per year. For comparison, the Malachim-Shachariya forest near Kiryat Gat, hosts an average count of several hundred young trees per dunam per year.

According to the researchers, the Yatir Forest sprouts struggled to reach maturity mainly due to the lack of rainfall. This was especially noticeable in dry years, particularly between 2017−2019, when the summer survival rate of sprouts dwindled to near zero. In addition, the study found that animal grazing, during which wildlife trample and eat the sprouts, and high tree density, which reduces sunlight penetration and the amount of water available in the soil, also impair forests’ regeneration capacity.

“If you come to Yatir Forest after it rains, everything will be green and beautiful, but you will not see a field of ‘children’ in the forest––young trees that will one day replace the older and dying trees,” says Dr. Tamir Klein of the Weizmann Institute of Plant and Environmental Sciences. According to him, the few trees that have managed to grow beyond their sprouting stages are very short and similar in shape to shrubs, rather than tall trees. Klein cautions the possibility that in about thirty years the forest may no longer exist.

It’s All About Drought

Regenerative failure is a problem many forests, especially those located on the edges of distribution ranges, experience. As the study reveals, the regeneration of large areas of the Yatir Forest in Israel is already being disrupted, especially during years of intense drought. In these areas, certain tree species run the risk of extirpation, the complete dying out of a species in one specific area or region.

“The climate crisis is giving rise to many changes all over the world, as well as increasing global temperatures and the frequency of drought years and extreme climatic events,” says Pozner. “Eventually, even forests that are considered wetter and retain greater levels of moisture will encounter and struggle with drought conditions.”

In the last decade, many studies have been conducted around the world examining the regeneration capacity of forests in the age of the modern climate crisis. Difficulties in the regeneration of various species have been found in species of pine and fir in the Rocky Mountains forests in the United States, the vegetation of which also suffer from drought-born wildfires. Spatial shifts and compositional changes in tree populations were also observed in boreal forests (very cold coniferous-hardwood forests that spread over high elevation areas in Asia and North America) and in humid tropical regions in East Asia.

It should be noted that other studies deal specifically with adaptation mechanisms that develop in trees at the cellular level that allow them to regenerate easier and cope with local climate changes. Such mechanisms have been found in forests in Greece, Brazil, and others.

So what can be done to improve the situation and help forests regenerate, despite the harsh conditions?

According to Klein, there are many forestry interface tools that can be used to aid regeneration such as: placing a protective plastic sleeve around softwoods in their first year that safeguards them from strong winds and grazing animals, establishing low dams near to lake rainwater, building low dams near trees to lake rainwater, selecting drought resistant trees for future plantings, and thinning trees to increase the amount of water availability in soils as well as the sunlight that penetrates through forest canopies. With measures like these and further research, next-generation sprouts may be better equipped to persist through harsh summer conditions and preserve some of the world’s most treasured and valued forests.