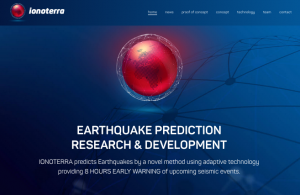 Uri Levine made a parallel between WAZE and IONOTERRA, the first company capable to offer earthquake predictions up to 12 hours before seismic event occurring. Being present to the first edition of IONOTERRA SCIENCE CONFERENCE held in Bucharest in partnership with main stream academic institution, POLITEHNICA UNIVERSITY BUCHAREST, WAZE’s co-founder said “If we are at 90% accuracy today at IONOTERRA, this is huge, this is good enough, it’s way much better than anything we have!”. “Over time what it turns out that the most significant value of WAZE is the prediction. Just imagine that you can predict earthquakes!” During September 2019, IONOTERRA successfully accomplished a public forecast session targeting Western Turkey and Eastern Greece, which returned over 90% accuracy. 68 out of 75 forecasts representing 90.66% have been confirmed by the EMSC/CSEM, having 4 miss events and 7 false alarms.

47 out of 68 confirmed forecasts, representing 69.11%, have been 100% confirmed by the EMSC/CSEM, in terms of predicted Location, Time Frame and Magnitude. 21 forecasts out of 68, representing 30.89%, were within the margin error. During the P.O.C. period the average Magnitude of the seismic events was 2.58 RS. IONOTERRA forecasting system has a significantly higher level of accuracy as the RS magnitude is higher, being above 4.5 RS. Co-Founder WAZE, Uri Levine added: “For a second I want you to think about top 10 companies of the world! There is Google, Microsoft, Amazon… and so forth. Ask yourself what’s going to happened with them in a decade. Half of them are not going to be in the top! The problem is that we don’t know which one is not going to be there. If we knew we would sell short on those and this would be a nice business model. But the more important is which companies are going to take their place in top 10!

And one of them maybe is just launching today!”, referring to IONOTERRA company. IONOTERRA earthquake prediction system is endorsed, among many leading scientists, by top earthquake scientist Prof. Dr. Sergey Pulinets – Principal Research Scientist in the Space Research Institute of Russian Academy. “Up to now the majority of seismologists said that short term earthquake prediction is impossible. We are scientists who are saying – YES IT IS POSSIBLE!”, stated Professor Pulinets referring to Ionoterra science team. “IONOTERRA is like the gold bullet who find the way to detect all three parameters with necessary precision: When, Where and What magnitude.” continued Pulinets. IONOTERRA is an Israeli based company, established in 2018, after 30 years of research conducted by Prof. Dr. Nathan Blaunshtein. It has been over 30 years since I dedicated myself to this field of research in earthquake prediction, identifying trends and processes occurring in the ionosphere.

These 30 years are the foundation of what today brought us all here – IONOTERRA. The accuracy of the results obtained over time has given us courage and motivated us to adopt new methodologies and advanced technologies that have brought us to this performance. Prof. Dr. Nathan Blaunshtein – Chief Scientist IONOTERRA. Mid 2020, IONOTERRA will run an experimental forecast session in California, USA, using a full deployment solution as part of its Proof of Work. The alerts will be provided to the relevant US authorities, some of them being targeted to partnership the company in running such experimental session.

The same experimental Proof of Work will be performed as well in Romania, in partnership with Bucharest Politehnica University and Romanian authorities, a project led by Prof. Mihnea Costoiu, Rector and former Minister of Education. “We need to create a response plan and an educational one, in order to be able to implement and react accordingly to forecasts issued by IONOTERRA.” Mr. Doron Angelovitch, CEO IONOTERRA is explaining that “an earthquake is not a spontaneous event. It is an event which occurs during or at the end of an entire process, which IONOTERRA is able to monitor and understand in order to issue over 91% accurate forecasts”. Regarding the prediction output itself, Angelovitch added “ we have minimized our Prediction into 3 parameters – where, When & What Magnitude in order to give a very clear cut and crystal clear picture to the Decision Maker so they can understand immediately what they should do”.