Bar-Ilan U.: Eilat corals may look healthy, but coastal urbanization is destroying their delicate biorhythm 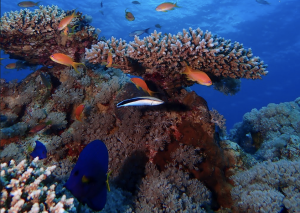 Acording to Prof. Oren Levy, Bar-Ilan University: Scientists must be involved in assessing the potential impact of urbanization on marine environments before municipal development plans are finalized.

Coral reefs in the Gulf of Eilat have been proven particularly resistant to global warming, rising water temperatures and bleaching events that are crippling their counterparts elsewhere around the world. But the findings of a long-term study by an international team of marine and data scientists, recently published in the journal Global Change Biology, confirm a different threat to this coral refuge in southern Israel: massive urban development near the Gulf coastline is taking a devastating toll on the local marine environment.

For an entire year researchers examined how and if urbanization is disrupting natural biorhythms, which are responsible for coral metabolism, growth and reproduction cycles, and whether urbanization could be an overlooked contributing factor to global coral decline.

Two sites in the Gulf of Eilat, at the northern tip of the Red Sea, were sampled — one in close vicinity to the city of Eilat, and one further away. Like any city Eilat emits various forms of chemical, light, hormonal, and noise pollution that can be harmful to marine environments.

Throughout the year the team sampled the reefs during different phases of the moon and different times of day, covering daily, monthly, and seasonal biological cycles. Many techniques, such as RNA expression, physiological studies, stable Isotope measurements, and microbiome analysis were used to understand how urbanization alters biorhythm.

Despite the corals’ relatively healthy appearance, the researchers discovered that natural biorhythms and environmental sensory systems were extensively disturbed in corals living in proximity to urban Eilat. Diel and lunar cycles related to coral metabolism, predation, microbial functional diversity, and circadian clock functionswere disturbed by the urban conditions. Altered seasonality patterns were also observed in the microbiomes of the urban coral population, signifying the impact of urbanization on the holobiont (the entire organism), rather than the coral host alone.

“On the surface the corals seem healthy, but when looking deeper than the naked eye, we saw the strong effect of urbanization very conclusively,” says Rosenberg. “The disruption of the daily and monthly cycles resulted in lower physiological performances and reproduction cycles that disappeared in the urban corals,” adds Levy. By contrast, corals in the non-urban site looked healthy and their biorhythms showed normal cycling over the sampling periods.

Levy asserts that scientists must be involved in assessing the potential impact of urbanization on marine areas before municipal development plans are finalized.

Levy, whose research also focuses on biological rhythms in marine animals, is currently preparing a review of the impact of light pollution on marine environments globally. With evidence that urbanization is a contributing factor to global coral decline, he plans to study the combination of sensory pollutants (chemical, light pollution, hormonal, and noise) on coral reefs to determine what thresholds of pollution they can withstand.