Technion (Israël): Invasive species of parrots, a danger to agriculture 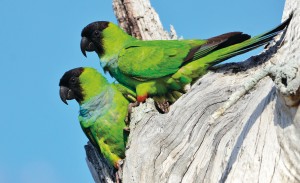 Ecologist Dr. Assaf Shwartz of the Technion leads a multi-national team that investigates the effect of invasive species in Israel and Europe: “It is important to prevent the release of non-native species in nature”

Non-native parrots can cause substantial agricultural damage and threaten native biodiversity, although impacts vary strongly depending on where these parrots have been introduced. Brought to Europe as pets, escaped or released parrots have established numerous wild populations across Europe. Tens of thousands of ring-necked and monk parakeets make up the bulk of Europe’s parrots, but several more species are also gaining a foothold. A pan-European team of researchers, conservationists, wildlife managers and policy-makers worked together under the umbrella of ParrotNet, an EU COST Action, and have reviewed available evidence on parrot damage, concluding that measures to prevent parrots from invading new areas are paramount for limiting future harm.

Today there are more than 200 populations of parrot species originating in South America and India. “These are parrots that were brought to Israel as pets and some of them were released or escaped from their cages and created huge free populations,” said lead researcher Dr. Assaf Shwartz, of the Faculty of Architecture and Town Planning at the Technion­–Israel Institute of Technology. “These populations are growing every year, and today there are more than 10,000 ring-necked parakeets and monk parakeets in Israel.”

Introduced parrots can damage the environment, but severe impacts are rare and localized. Most reports of damage were linked to the widespread and locally abundant ring-necked and monk parakeets. Studies show that in their native ranges, both species can, and regularly do, inflict large crop losses, but in Temperate Europe, expectations of comparable widespread and severe damage to agriculture have so far failed to materialize. Severe impacts on crops were recorded in Mediterranean Europe. Competition with native species presents a more serious problem, especially for ring-necked parakeets as they can compete with native species for food and breeding sites. In the Americas, monk parakeets are notorious for the damage their stick nests cause to power infrastructures by catching fire, yet very little evidence for such problems exist in Europe. Reported impacts for other parakeet species in Europe are virtually nonexistent, probably because these species have been introduced more recently and currently exist as relatively small and localized populations.

The study, published in Neobiota, also highlights that differences in the type of damage, and the way they are reported and summarized influences the outcomes of invasive species impact assessments. The generalized threat level that invasive species pose is often based on their worst known impacts, whilst the capabilities of a species to do damage often requires specific circumstances. While this is relevant information for identifying those invaders that can potentially have major impacts, it is not necessarily representative of the impacts the species is likely to have when introduced to a new area. Similarly, including damage reports from the native range or from other invaded ranges typically results in higher threat level estimates compared to what actually has been observed in Europe.

“The ring-neck parakeets and monk parakeets have already established large populations in Israel and in Europe,” said Dr. Shwartz. “Ultimately, the decision on ways to reduce the damage is in the hands of the decision makers, but as scientists, it is important to note that the best way to combat species invasions is to prevent the release of non-native species in nature. Studies have shown that in the islands it is possible to eradicte /mitigate populations of invaders (for example in the Seychelles), but on large continents, in areas such as Israel and Europe, there is there is no ‘silver bullet’ solution to the problems , so it is important to conduct wide cost-benefit studies before taking various measures.”