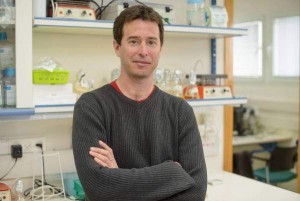 A brown blotch on a plant leaf may be a sign that the plant’s defenses are hard at work: When a plant is infected by a virus, fungus or bacterium, its immune response keeps the disease from spreading by killing the infected cell, as well as a few surrounding ones. A new study at the Weizmann Institute of Science, published today in Nature, points to the evolutionary origins of this plant immune mechanism. The study may help explain how major plant defenses work and how they may one day be strengthened to increase resilience against plant diseases that each year cause billions of dollars of crop losses worldwide.

About two years ago, scientists in the United States and Australia discovered that when a plant’s immune system kills infected cells to contain disease, this action involves a protein with a segment called TIR that produces a certain signal molecule. In a new study led by Prof. Rotem Sorek of Weizmann’s Molecular Genetics Department and Dr. Gal Ofir, then a graduate student, Sorek’s team has revealed that bacteria also use TIR as an immune mechanism, and that TIR achieves immunity in plants and bacteria in similar ways.

Bacteria wage an ongoing battle against viruses called phages – tiny Moon-landing module look-alikes – which insert their own genomes into the bacterial cell, causing that cell to make new phage copies until it explodes and dies. Ofir and colleagues found that as soon as a bacterium is infected by a phage, the TIR-containing protein senses the invasion and generates a signal that alerts a second protein. This second protein destroys a molecule that plays a vital role in the bacterial metabolism. Depleted of this molecule, the bacterium dies before the phage has a chance to multiply, suppressing the infection.

After revealing how the TIR defense works in bacteria, the researchers showed that the signal molecules generated by TIR in bacteria and in plants are similar. In fact, when the Weizmann scientists transferred this signal molecule from a plant to a bacterium, it triggered bacterial death. The role of the TIR-produced signaling molecule in plants is yet to be fully revealed, but it probably works along the same lines as it does in bacteria. In both cases, the immune mechanism proceeds as follows: The TIR-containing protein senses the invasion, generates a signal molecule and causes the infected cell to destroy itself – the entire bacterium in one case, a plant cell in the other.

“Our findings have established a direct evolutionary link between the immunity of plants and that of bacteria,” Sorek says. “Moreover, they provide a basis for investigating how a major defense system, one involving TIR, works in plants.”

Such investigations may lead to new ways of enhancing the immune system of plants to make them more resistant to infection. That’s an urgent issue, considering the scale of losses in agricultural crops and the shortage of effective solutions. One poignant example is citrus greening, a bacterial infection that is killing orange trees worldwide, including in Florida, where it has recently halved citrus yields. There is currently no cure for this disease, but new insights into plant immunity may in the future help develop ways of protecting the world’s orchards from this threat.