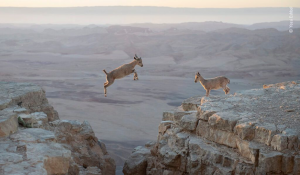 A photo of a Nubian ibex bravely jumping over a ravine in Mitzpe Ramon to reach its sibling on the other side, taken by a distinguished Israeli photographer, has received a Highly Commended honor in the Behavior: Mammals category of the 56th annual Wildlife Photographer of the Year competition 2020. The winners were announced earlier this month.

The photo, “Kids’ Game,” was taken by renowned Israeli photographer Yossi Eshbol, one of the top nature photographers in Israel and around the world, who has documented nature and wildlife in photographs for over 30 years.

The photo was chosen among 49,000 global entries in what is considered the largest wildlife photography competition in the world. Winners and highly commended entries were selected by a panel of international judges from the UK, Spain, Germany, US, and Sweden in a number of categories.

The overall winner of the competition was announced on Tuesday, October 13 during a virtual ceremony that was live-streamed from the Natural History Museum in London where The Duchess of Cambridge, Kate Middleton, declared Russian photographer Sergey Gorshkov as this year’s Wildlife Photographer of the Year. His image, “The Embrace”, featured a wild Amur tigress hugging an ancient Manchurian fir in a Russian forest.

Finnish teen photographer Liina Heikken won the Young Wildlife Photographer of The Year award for ages 15-17. Her photo “The Fox That Got The Goose” follows a fox on one of Helsinki’s islands that “won” a goose after fighting with other hungry cubs over it.

Photographers were allowed to submit a total of 25 photos in the competition to be evaluated in 16 categories. Judges announced winners in categories that ranged from animal portraits, animal behaviors, and animals in their environment to plants and fungi, oceans, wetlands, and photojournalism.

For categories such as Photojournalist Story Award, Rising Star Portfolio (ages 18-26), and Portfolio Award (ages 27 and up) photographers were required to submit at least six and up to 10 images.

Wildlife Photographer of the Year is the internationally renowned competition that recognizes, rewards and celebrates the work of talented photographers, from amateurs to professionals.

The ibex that jumped…

Yossi Eshbol was the only Israeli photographer to be recognized as part of the competition this year.

The acclaimed nature photographer from Zichron Yaacov tells NoCamels he actually took the ibex photograph with his Nikon D4S camera about two years ago in the Spring.

Mitzpe Ramon “is one of the most interesting places to photograph,” Eshbol explains, because it’s one of the easiest areas to move “unmediated” and see scores of ibex looking for food. Those ibex go up to the cliffs because that makes it difficult for their predators to reach them and they have specially designed hooves that enable them to jump, he says.

“When I realized a mother and her kids were doing this, I waited for them. I never saw the mother jump, but I saw her kids jumping at a great height. As soon as I saw this happening I started shooting with my professional camera that can perform a series of very fast shots in one click. This is what allowed me to get such good photos.”

“What I really liked about this photo is not necessarily the jump itself but the fact that the brother was waiting on the other side as a guide. It was beautiful, watching the twin waiting for his brother,” he adds.

Eshbol says the original title of the photo had something to do with this concept, but that the editors of the competition changed it to “Kids’ Game.”

The Nubian ibex, a desert-dwelling mountain goat is found throughout parts of the Middle East, including Jordan, Saudi Arabia, Yemen, Egypt, and Israel. Less than 3,000 ibexes are estimated to remain in the wild and about half of them in Israel, making their home in the Judean desert and the Negev.

Eshbol tells NoCamels this is the “fifth or sixth time” he has entered the competition in the last 15 years.

In the last two weeks, Eshbol has been working on a project photographing the migration of birds on the shores of Ma’agen Michael, a kibbutz in northern Israel on the coast between Haifa and Hadera.

“Two or three mornings a week I go down to the beach. I need to be close to them and then I can take a photo of them at about 20 meters away,” he says. “The birds come from the tundra areas and many arrive at the beach exhausted and looking to replenish their energy.”

“It’s very special that they come to our beaches,” he says.

Eshbol is a self-taught nature photographer who became interested in the field in the late 1970s after accompanying a friend during a conservation project run by the Israel Nature and Parks Authority.

After retiring from the Society for the Protection of Nature in Israel in 1986, Eshbol became an independent photographer. In 2005, Eshbol was a runner-up in a “Nature Photographer of the Year” competition held by The Burke Museum of Natural History and Culture in Seattle, Washington, for his photograph of a Common Tern bird family.

His photographs have been published in Israel and around the world in exhibitions, international photography competitions, photography books, newspapers, and textbooks. He is considered a pioneer in his field.

There were also winning photos in other Behavior categories including for Amphibians and Reptiles, Birds, and Invertebrates.

Ecuadorian-based Spanish photographer Jamie Culebras won in the Amphibians and Reptiles category for his photo, “Life in the Balance,” of a “glass frog,” or Manduriacu frog found only in a small area in the foothills of the Andes mountains. Walking four hours to reach their location, Culebras claimed the first-ever picture of the species feeding, according to the museum.

In other categories, Danish zoologist and mammal researcher turned wildlife photographer Mogens Tolle won the Animal Portraits category for his photo, “The Pose” of a proboscis monkey posing as if in meditation.

Chinese photographer Songda Cai won in the Underwater category for his photo “The Golden Moment” featuring a diamondback squid that changed color as Cai photographed it during a night dive.

The Photojournalism and Photojournalist Story Award, examining relationships between humans and the natural world, had images that were striking and even sometimes disturbing. The winner of the Wildlife Photojournalism award was an image called “Show Business” by US photographer Kristen Luce of a polar bear wearing a wire muzzle during an ice-rink show in the world’s only polar bear circus.

UK-Australia photographer Paul Hilton won the Wildlife Photojournalist Story Award for his images featuring a chimpanzee entertaining the crowd at the Animal Olympics in Shanghai, China, a Sumatran orang-utan held in a house in Indonesia, a young Asiatic black bear lying on his back and spinning fire sticks as part of circus entertainment at a safari park in Guangxi, China, and a macaque being held at an Indonesian animal market.

The images are currently being showcased in an exhibition at the Natural History Museum and will remain there until June 6, 2021, before they embark on a world tour to international venues in Australia, Canada, Denmark, Germany, and more.

All winners and highly commended entries of the Wildlife Photographer of the Year competition can be seen on the National History Museum’s online gallery.

The 2020 competition opened for entries on Monday, October 19 and closes on December 10. The competition is open to photographers of all ages and abilities.